Gator RP Group
Murder Mystery RP is a social roleplaying game activity often hosted by Roflgator in VRChat that involves each player portraying a character role while there is a secretly assigned murderer and one detective. The designated murderer's mission is to go around eliminating each participant without being noticed by the detective or the other players. Each session is timed and at the end of the session the participants have to figure out and accuse each-other, the detective has the last word on selecting who the murderer is.

After a "suspect" is decided upon by the detective they are "eliminated" after which the game master tells if it was the murderer or not. If it was not - the game continues in another session. Each game usually consists of 2-3 sessions and if the murderer gets away, he wins!

The goal of the game is to have fun roleplaying social interactions and always stay in-character during each session, not to power-game.

It is often hosted at The Platinum Meechler map as it is very optimized and features a large outdoor area.

To help the game master manage the session each participant is required to gather on voice chat with their microphones muted for example, Discord. The game master privately messages players to secretly assign who is the murderer for the session. He also makes announcements when a murder has occurred in the game.

To prevent players clumping together the game master can make call-outs to groups to split up that they must obey in order to not make the murderer's task impossible.

The Gator RP Group gathering for a session 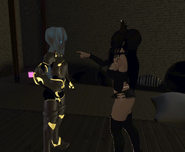 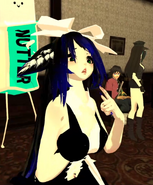 Cindy Lou accuses Firefox Blue of being the murderer!
Community content is available under CC-BY-SA unless otherwise noted.
Advertisement