White
Rin is a demon who tries his best to protect his childhood friend Ais. He works in a sweet shop named Happi with his friend (aka Boss) Ais Hestia. He lives in Ais's apartment within Callous Row, recently leveling up from the couch to the bed. He is portrayed by KuriRed.

Rin Takemakizuchi came from a hard world filled with a Black and White look on life. Always doing what needs to be done from taking care of some unwanted guest to dealing with problems that needs his expertise to take care of. Rin was born and raised in this city. Made a life with the people that took him in, they're what made him, him. His boss, or what the old man was known by the Don, treated him like family. When he was shot and laying there, like a fish gasping for air he made Rin swear to protect his grand-child (Ais Hestia). So that's where you can see Rin now; at the sugar tooth store "Happi" 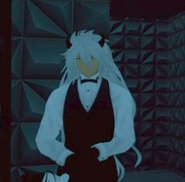 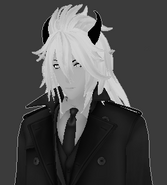 Recruited to perform a robbery of a corporate patrol. 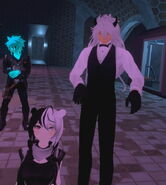 Rin in the sweet shop

Rin and Charles injured after the robbery job.
Add a photo to this gallery
Retrieved from "https://vrchat-legends.fandom.com/wiki/Rin_Takemikazuchi?oldid=73024"
Community content is available under CC-BY-SA unless otherwise noted.