Rikket Rotfinger was the runt of his broodmother’s litter and was nearly being eaten by the others of his kin. By some luck, he was able to survive his early years without being devoured by the others.

Being a weak welp, he was not able to join into the higher ranks of his clan, having to settle for just being a part of the low caste. He had to scrounge for any scraps of rotten meat to try and keep up with his atrophied body. While fending for himself in the grime-ridden streets, he found a single marker. This was the start of finding his own way to make his mark.

Throughout his time he would practice and get bolder with his graffiti. Rooftops, sewers, tunnels, anything he could reach was his for the taking. As chance would have it, when you explore and run around enough hiding from people, you tend to pick up on what others might say in the dark. Gathering and selling information to anyone became his little gig to try to reduce having to eat out of the trash every single day to maybe just once every five days.

In his world, the more fame or infamy you gain for yourself is everything. Your reputation is your life. Rikket will make his way not through strength but through making his marks and forcing everyone to see what he can do.

In Season 2 Episode 8 he stabs the former mayor of Scrap Town, Rico Suave to death - thus ending his legacy for good. 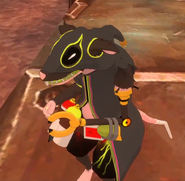 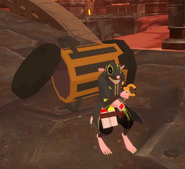 Carrying his trash can 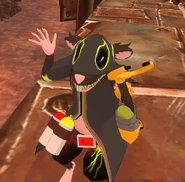 On top of a roof with Sheila and Wit

Renting a vehicle from Batharra with Sheila, Bub and Wit 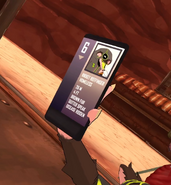