Red
Reyna Ryder is the owner of the mechanic shop in The Row. She works on vehicles and lives in the chop shop having a lower-income living style. Rebel wishes to rebuild The Row from the ground up, to gain respect and power for herself, and to take over the city, or at least try to.

She is portrayed by ThatOneRebel.

Ryder grew up from the slums of The Row. This is her city and she knows it well. She started from the very bottom, growing up in a poor family with her older sister Rebecca, always looking up to her for guidance and comfort.

The two of them would often get into mischief and petty burglary. Reyna learned how to steal and get around the city, and the two of them got accustomed to living in The Row. Their father was a junker who ran a small corner shop repairing small gadgets and tech. He had a gambling problem and owed a lot of money to one of the local gangs. He struggled to pay the money back and it ended up costing him his life.

Reyna and her sister took over the loan from their father, and after a few years of stealing and scamming people the debt was paid. Her sister went missing shortly after heading to the "Wasteland” never to be seen or heard from again. After Reyna settled down, she purchased a garage in The Row where she works and repairs various machines.

A plague took over The Row not long ago and the street went into quarantine. Its origin is unknown, but it has affected Reyna Ryder. She was affected by a throat disease and had to talk softly and whisper as a result. Her voice sounds more masculine despite being female. 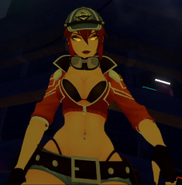 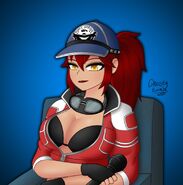 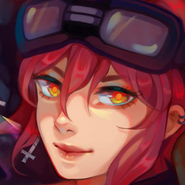 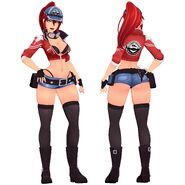