Relic hails from a wasteland tribe of dune nomads named the Sandsailers, a tribe of survival of the fittest where ignorance is bliss to the unknown and the uncertain. Relic scraped by with what he could doing odd jobs around the campsite. Because of his lack in physical strength, fixing mechanics and making trinkets for favours and supplies was how he earned his food and stay.

One day he and his clan got stuck in a sudden sandstorm, Relic got separated due to specific reasons and forced to seek shelter, when the storm calmed down he was alone in the wasteland and slowly made his way through the desert. Barely surviving he stumbles on Scrap town, where he now resides and is trying to perfect his mechanic skills.

On Season 2 Episode 20 during an excursion to The Golden Lance with Sheila, Sir Polka and Raleigh he tripped off a railing and fell to his death as they were attacked by wasteland raiders.

When Sheila learned Relic didn't make it out of the Lance, she became distraught. In an emotional rage she summoned a storm over Scrap Town, a heavy downpour complete with lightning. One particularly strong bolt struck the already-weakened radio tower Horizon had constructed, blasting it to pieces and collapsing it on Horizon's house.

Sheila blamed herself for Relic's death and carried that with her. Still in emotional turmoil the next day, she killed Hodd Toward, Bethany Esda's creator in the Undercity. 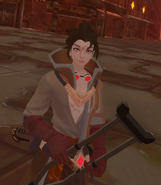 Sir Polka diagnose Relic Dusterson with having a "loose butthole"...