Like most other people in Callous Row, Rei seeks a stable, quiet lifestyle, even if it sometimes leads to being poor and homeless. She tries to acquire some sort of small income by selling or trading as a travelling merchant. If Rei ever decides to no longer be one, she will focus on being an Exorcist.

At a really young age, Rei had been sold off to a bunch of smugglers by her parents, due to them needing more money for their own survival. Simply taking care of a child was too much for them, living in such a poor lifestyle. Though that roughly ends as she was taken in by some synthetic robot merchants to give her another chance at life. They were the main parental figures for the child during most of her teenage years. She learned how to become a cultural travelling merchant and made products by hand in a traditional manner. She also was educated about how things worked in this world. Technology and machinery never really were of interest to her, as seeing it everywhere in this generation made it seem dull. Due to travelling so much from place to place, she’s quick on her feet. Though she's underweight due to not having the proper nutrients from good food.

Since the discovery of magic in her adulthood, she became more fixated on learning how to manipulate such essence and perhaps using it to benefit her products. The synthetic merchants taught her everything they knew about magic, but she needed to go out more in specific places to be able to continue studying it.

At some point, Rei had been tampering with magic crystals that the other merchants had lent to her to study, which made her cut off from them for the rest of her life. There are permanent physical changes in her overall appearance, but she still remained human. Rei was cursed by many who came across this woman, but that didn’t stop her.

Rei has been hearing rumors and gossip about some unfortunate events happening in Callous Row, so that’s where she decided to travel to for the time being. 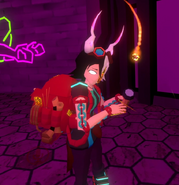 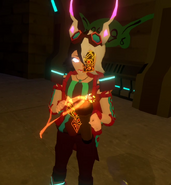 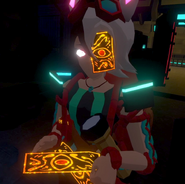 Add a photo to this gallery
Retrieved from "https://vrchat-legends.fandom.com/wiki/Rei?oldid=86292"
Community content is available under CC-BY-SA unless otherwise noted.