Female
Reeza Dunewind is one of "the wanderes" of Scrap Town and known for organizing "scrapping" runs. These runs are expeditions headed out into the wasteland to locate valuable salvage to bring back to town to refurbish or to sell.

Reeza Dunewind is a red orc scavenger whose people have been living in the Wasteland of Hellion since their transport crashed 16 years ago. They were refused rescue by TraVerse, as their landing was deemed a 'safe arrival' into the system. Because Reeza was physically scarred by the crash, her mother contracted with the local nature spirits and saved the wary orcs with powerful magics.

Now Reeza, a skilled scavenger and magic user who empowers herself with mana, has crossed the wastes to Scraptown, the Wasteland outpost at the edge of Savior City, at the urging of the spirits. Leaving her people behind, she is entering the heart of the conflict between magic, mega-corporations, and slummers, with nothing but questions about all three.

At first nothing more than a spirit infused scavenger, the events surrounding Salvation City in the last year have given Reeza a new home away from her people. She has made friends with the other Spirit Walkers and the Coven of the Divide and she has gone from a member of the scrapping crews to one of its lead figures.

With a better grasp of her powers and her goals, the red orc has begun magic crafting in earnest with the Wanderers and is aiming at the goal of bringing balance to the magic of the Wasteland and protecting the spirits within from corporate exploitation.[1] 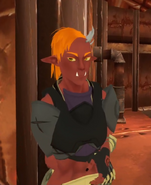 Reeza speaking to a spirit

Ordering a water tank from Patches 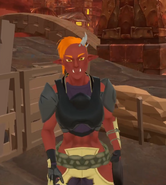 Driving during a scrapping run

Ready to head out on a scrapping trip

Scrapping in the wasteland 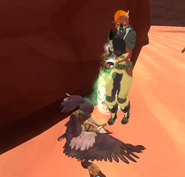