While living down in the slums and working as a freelance hacker, he would always wish he could hack and process information at a masterly rate.

One day Mars Corp. had caught onto his skills and approached him with a deal. They would test out a new head augmentation that would be able to scan and process information, just as Razz had wished, but he would now have to work for Mars Corp as an espionage agent.

After Lead Field Agent Enzo Quintiliano left Corvanis 3 early in the season, he was promoted to Acting Head of Mars on the planet.

In Episode 24, he was attacked by an Illithari in the Upper City while going about his business alone. The creature assumed his form and used his appearance to get to Leonard and Goldman. The alien only used his appearance as a temporary disguise, so he wasn't killed by the encounter.

In Episode 25, Razz was gunned down by a squad of Illithari scouting the Upper City for targets. Their incredibly powerful weapons took their toll on him, he was declared dead by Dr. Emilia not long after he arrived at Nirvana.

Mission to bramble canyon in the wasteland with Luca

On a mission to Bramble canyon with Luca, Korgak and Heater

Pinned with the injured Korgak and Heater

Guarding Luca with Heater during a mission

Attacked by a giant scorption 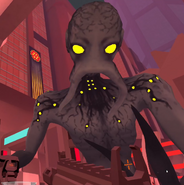