Black
Rana Amariah is a Jackal Hybrid working as a bioengineer for Nirvana corporation in Callous Row. After her assumed exile from the Row, she returned to the Corp sector in the Upper City via help of a dropship where she resides. Complete with the higher end life style to boot and to feed her tastes in her research of genetic experimentation.

Rana intends to climb the corporate ladder and attain a position of greater freedom. She is played by JadedMinx.

Rana Amariah was born in another planetary system far from Corvanis 3, on an oasis planet named Ceres that had been devastated by nuclear warfare. During her youth she grew up in a poor village largely populated by normal humans where she was ridiculed by the other kids for her ears, tail, and her size referring to her as the wolf girl with one group of kids having her pinned down and slicing her tail off to take as a trophy for conquering the dreaded wolf girl in some cruel game. The bullying continued into her young adult years, seeking a way to become more "normal" she found a job working for Nirvana. Initially starting out as a data entry clerk, climbing her way up after going to college and landing a promotion. It was during her first year of working as a biochemist, she met a man who would later become the love of her life, Cyrus. They got along fairly well during the next few years with her fondness growing for him as he didn't seem to mind her long, fluffy ears and her unusual golden eyes.

The next chapter of her life began when Cyrus finally popped the question on her after 3 years; with her happily saying yes. As time went by, they discovered due to her mutated genealogy, she was unable to conceive a child and was left distraught and went back to resuming her research to become more human like. After 10 years of obsessive hard work she succeeded, but what happened soon after is the day that became a nightmare for her.The lab animals they used became enraged and vicious and attacked anyone and everything that was living, the spread of the mutation from animals to humanoids was varied and fast, but the first of the humanoid victims was her beloved husband, Cyrus.

Word soon reached the ears of the higher ups in the corporations as they deemed the planet a threat, word traveled down to those working in Nirvana that there was an evac plan. Knowing that Nirvana would check anyone boarding a company ship, she decided to charter a private ship with auto pilot and cryotubes on board for storing a large amount of medicine as she made her way to a new home on Corvanis 3 where Nirvana had a new station for her.

After being involved in the kidnapping of Bo for the Nirvana Corporation for research she was banished into the wasteland by Mayor Eric. 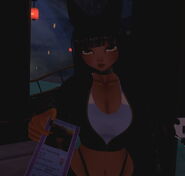