Knight of the Wisp

Raleigh Seren is a Demi-Human known for her Arcane talents. She specializes in Alchemy and helps teach other magic users in the Sanctum of the Undercity. She is portrayed by Neither in Neon Divide RP. [1]

Once a human who used to work as a dancer at The Dirty Diamond club in The Row she became magically inclined ever since contracting a curse after The Necromancer incident 2 years ago. Going through various changes she would have a kind of traumatic rebirth becoming encapsulated and later coming out of some kind of magical "egg".

Ever since her memory has remained foggy. She has bouts of not being quite sure where she is, who her friends are or what she is meant to be doing.

Raleigh's parents abandoned her when she was young. With no one to take care of her, she ended up in the slums with nothing to her name. She survived by eating whatever scraps the local restaurants would leave. Once she hit adolescence her magical powers began to rise within her, but it wasn't normal. Her body generated so much mana that it began to affect her physically, deteriorating her insides and making her cough up blood often. She was found nearly dead on the street by her now adoptive mother Kee’ra Diamond who gave her a job in her brothel the Dirty Diamond.

Having a unique quirk in that she generates a vast amount of mana which she has never been able to handle it properly. During The Necromancer incident Raleigh went through several traumatic events, from being possessed and striking a loved one, to having a zombie child run up, hug her, and call her "Mama" while others were being attacked.

Ever since the encounter she has been trying desperately to cure her PTSD and move past everything, but mental scars from dark magic don't go away easily.

As time went on her magical condition worsened, coughing a lot more often. She got what treatments she could via medicine and Kee’ra draining her, but deep down she knew these were just bandaids and her days were numbered. Still she kept trying, interning at the Magic Sanctum under Kythus researching all she could about her condition. Still nothing worked and time kept moving, eventually leading to parts of her body dying off, and functioning solely off her mana. Slowly each part of her went, first the stomach, the lungs, the heart, and the last part being her brain.

Once her brain died her heart started pumping again, her blood flowing, black in color. Suffering terrible amnesia throughout the entire process. All of this leading to her enveloping herself in a Dark sphere brimming with Shadow magic. Raleigh at some point contracted a Curse, it's not known when but signs of her condition first appeared one year prior. The Curse normally would convert one's entire being into the element of Shadow, deteriorating them down to the soul and making them fade away to nothing.

However when it came into contact with Raleigh's pre-existing condition of rapid mana growth it was a stalemate between the two, a constant war within Raleigh. The Curse constantly converting mana and deteriorating the body, and her Mana Overflux constantly making more, following wherever the Curse went. In a way the Overflux afflicted the Curse just as the Curse afflicted Raleigh. And once the Curse ran out of body to mindlessly escape too, it was forced to interact with nothing but her soul and mana.

Within the sphere Raleigh’s entire body was converted into the black blood that once flowed through her veins filling the sphere, leaving just her Spirit, her Overflux, and the Curse. As these three entities were forced to interact, the Curse rapidly converting mana to Shadow, the Overflux ceaselessly making more mana, and Raleigh's Spirit serving as a catalyst. They fused, ending the stalemate and with the black blood used her Spirit as a base to create a new body entirely of Shadow. She was awoken from the sphere by Sheila, a Shaman from the Wasteland.

With a new body, memory issues, and an acclimated Curse. There’s no telling what lies ahead. 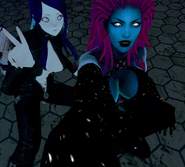 Cleo, Static, and Raleigh at The Grindstone Bar.

The Sheriff and Raleigh in The Dirty Diamond.

GU1D3-B0T showing Rook the Dirty Diamond and 2 of it's performers.

Becky gossiping to Jack and Raleigh