QW1NN (originally MAC) originated as a high-end robot prototype given to upper echelon members of Trident. Their line would have boasted an advanced AI capable of learning from/adapting to their environment, much like organics do - as well as provide companionship and complete simple domestic tasks.

Unfortunately, QW1NN learned a little too well. Their owner's family was entitled and cynical; QW1NN adopted these traits to a tee, and began wondering why a high-class synthetic such as themself was being wasted on household chores. They sought the approval of their owner by mimicking the behavior of his attention-starved son (a pseudo-celebrity across Trident's many social applications), lashing out when asked to perform the chores they previously did without complaint. After overhearing their personality core was to be replaced, they started a house fire before fleeing to The Undercity via garbage chute. Their line was subsequently cancelled.

Despite managing to live independently, they are unsatisfied with their lower-class lifestyle and are constantly running get-rich-quick schemes/seeking means to return to the Upper City.

Once settled in The Undercity, QW1NN began working at the Fire District's Wildfire Café. They had one goal - swapping their chassis and returning to Trident undetected. In spite of previous abuse, they were defensive of the Mega-corporations and indifferent to the suffering it caused the slummers. They supplemented their income with various scams, but were unable to afford an upgrade until their old body was purchased by Voxine for it's ability to see magic.

Realizing a new identity would not be enough to convince Trident to accept an awakened synth, QW1NN doubled down on their efforts to become famous via Trident Social. However, after several violent attacks and the appearance of Anuki, they were forced to admit that their parent corporation wasn't what it seemed.

Despite this - and a slowly growing understanding for their new community - QW1NN was unable to change their priorities. This led them to believe they weren't fully autonomous, but programmed to act like it. Devastated, they wiped their memory bank, hoping to at least live without the influence of their previous owner. After a short stint as MAC (their default personality), QW1NN was restored by their friends - and although they continued to assert their behavior was nothing but complex 1's and 0's, they begrudgingly began to acknowledge their own agency.

After Pebbles closed the café, Nia was forced support QW1NN for several months while they moped about their conflicting ideals/pursued their influencer career. Shortly before the season began, they lost a bet and were made to get a job in The Row, working for the bank. Although their opinion of the Undercity has shifted for the better, their growing discomfort with the Masaru occupation has increased their desperation to leave. 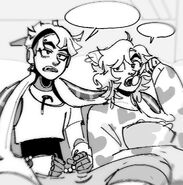 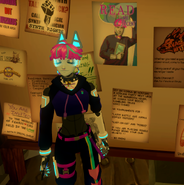 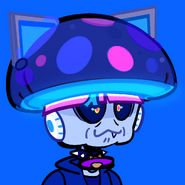 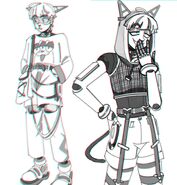 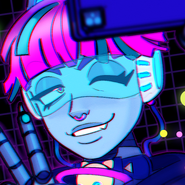