Satchi
The Purple Lotus was created to welcome new roleplayers to join in a free-form Role Play environment. We are a safe, welcoming space for all experience levels, from first timers to experienced players. The Purple Lotus specializes in casual character-focused role play and is designed to teach by example. With an experienced staff and regular role play veterans, newer members enjoy a dedicated RP community without needing to submit backstories or character sheets. Even if this is the first time, we welcome all to come visit and enjoy themselves by following a few rules to keep to the casual theme.

This Article is for Out of Character information. For in-character please see:

On the Purple Lotus Discord, the VIP List role is pinged with notifications of the night's Host and Open Lobby start time. Purple Lotus runs as an Invite lobby with a maximum of 40 visitors and staff due to VRChat performance concerns. Players should send an Invite Request to the night's Host once the Lobby is open. General start time is 9PM PST/12AM EST/4AM UTC. Character sheets are not required to join, but all players are asked to remain In Character at all times once in the Purple Lotus Lobby.

In addition to Public Role Play, Purple Lotus schedules classes to assist new members with various role play skills. Classes are announced on the Purple Lotus discord and run on Wednesday evenings. Classes cover various introduction topics like Role Play 101, Character Creation, and Power/Ability design for Balanced Characters. Class announcements are made in the #rp-class-announcements channel. Purple Lotus holds the classes in VRchat and streams them live via Discord VC and Twitch TV.

Players will remain In Character At All Times

The Purple Lotus is a strict RP-only group. As such, visitors and staff are expected to remain in character at all times. We understand occasions will arise where an ability, movement (for keyboard users), event, or character moment may require an explanation of the situation. We ask that all such ‘OOC’ talk be brief and directly to the point. Longer explanations must be moved out of the Purple Lotus into another lobby or Private Room. Avoid using ‘out of RP real quick’ as this disrupts the RP of others. If lag or performance issues occur, those can be approached In Character. As an example, “I’m having a bit of a headache” for describing a low frame rate, or, “I could not hear you, could you repeat that.” IC notes do not disrupt the flow of RP for other participants and keep the lobby focused on the moments shared between characters. For bathroom and unexpected OOC interruptions please head to a bathroom and mute the mic.

Disconnects, reloading and logging back in do not need to be brought up to the Host. We understand if external issues affect your connection, and the RP will continue once you are back.

No Meta-Gaming or Stream Sniping

Definition of Metagaming - Metagaming is the use of knowledge outside of what a character has seen, heard or been told by another Character. Definition of Stream Sniping: Stream sniping occurs when a participant has a stream open and uses the information seen or heard to acquire knowledge that is outside of what their character saw, heard or was told by another Character. Metagaming and Stream sniping are NOT tolerated at the Purple Lotus. An example of Metagaming via Stream: A player sees a Role Play event in progress on a stream and attempts to join and involve their character in the RP even though the character has no knowledge of what happened. Characters with abilities that allow knowledge to be acquired indirectly must establish the ability in RP before involving themselves in an event they were otherwise not present for or aware of.

Disruptive Events influence other visitors in the Purple Lotus by interfering with the Role Play. The Purple Lotus is a casual and character-focused Role Play environment designed to encourage moments between characters. Any event that will influence other visitors without their knowledge must be discussed with the Host and staff and approved ahead of the interaction. Major events must be approved by Satchi. Examples include but are not limited to: poisoning, planting devices, attacking, mental disruptions, stealing from the Lotus, damaging the property of the Lotus, or abductions. If in doubt, ask the Host first.

We welcome players to bring in original characters. No character sheet or approval is required; however, as Purple Lotus RP is a social roleplay that hosts new and inexperienced roleplayers, we enforce no combat and disruptive ability restrictions. This corresponds with Rule #3 - No Disruptive Events. If there is a question of usage of an ability, speak with the Host. We ask users do not attempt circumvention of the security staff or relics by creating 'exempt' powers or abilities for their characters.

The Purple Lotus is equipped with multiple rooms that can be locked for the use of our visitors. These rooms are provided to allow short personal and private interactions between characters. Private rooms are not AFK locations or sleeping locations for visitors. For interactions that last an extended time, visitors are asked to leave the Purple Lotus lobby and head to another world or lobby to make sure rooms remain available to other visitors. Do not respawn or disconnect while in a private room. Visitors who leave a room locked will be removed from the lobby and not allowed to return.

Do not sleep in the Purple Lotus. The performance of the lobby depends on a limited number of participants, and spaces taken up by sleepers decrease performance for all who are present. Visitors found sleeping will be removed from the lobby and not allowed to return.

The rules of the Purple Lotus will be enforced by a Three-Strike rule with the understanding that egregious violations may result in escalated enforcement. 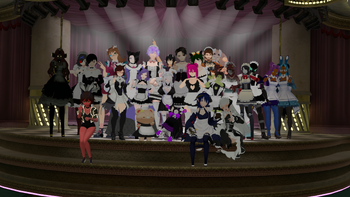 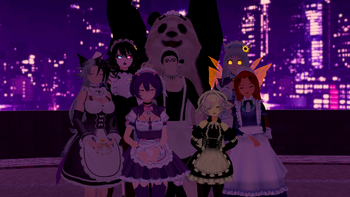