Proximo, the rugged and old but still handsome, is a wastelander who was gifted in the art of combat. With Hark as his mentor he climbed out of the waste to become the "Champion of Callous Row" being one of the greatest fighters known in the to fight in the past row. After losing a massive bet on his final fight, Hark and Proximo return to the wastes to announce fights at the Thunderdome.

On Season 2 Episode 2 he together with Hark Deadwood hosted an arena fight where Ryzy fought and won against the Nameless Knight. The battle was the inauguration for the reopening of the thunderdome arena. 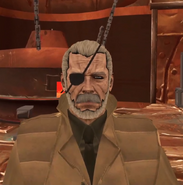 Hark and Proximo in Patches smithy

The imposing duo, Hark and Proximo
Add a photo to this gallery
Retrieved from "https://vrchat-legends.fandom.com/wiki/Proximo?oldid=87116"
Community content is available under CC-BY-SA unless otherwise noted.