"Alchemy is no joke." ― Vondanen

"I expect complete obedience, all ears and all eyes to the front of the class at all time." ― Vondanen when teaching.

"I don't have friends and I don't intend to make friends. Especially not with students." ― Vondanen when speaking to Chipz on multiple occasions.

Vondanen or 'Von' (pronounced Vahn) is a master in monster slaying who teaches alchemy at the Ascension Academy, he is also the head of "General Squad", consisting of the students who have not been assigned a Squad yet.

His physical form comes from possessing another person which he refers to as his "vessel". The reason he wears a mask is because his "vessel" was attached to it.

Von dislikes his current fragile human form but appears to be stuck in it one way or another. Perhaps he is not actually "stuck" per-se but rather it would be highly frowned upon by the Academy to possess someone against their will, and finding a willing subject would prove very difficult.

Professor Von's Contract expired at the end of the second school year in early 2121, releasing him from his demonic obligation to the Cross-Allied Forces. After this, he retired.

Alchemy and a mysterious Door

He focuses mostly in making healing potions and healing balms. Currently he's assisting Professor Connor to also master alchemy by having him test his potions.[1]

The squad of Chipz, Rook and Esmae overheard him together with Professor Willow in a crystal cavern looking for a way to possibly attempt to open an ancient door there. Unbeknownst to them at the time Headmaster Kareeda was also present in the form of a tree. [2]

When preparing an ointment for Chipz he revealed that the person that he possesses as his "vessel" used to be a criminal who fought for two weeks before he was able to take full control over him. He had wandered for a time looking for a host who did not go along willingly. He said that the Academy is lucky to not be his enemies and mentioned that he was sent to from The Hellscape in order to work for the Ascension Academy. [3]

Catching someone bad at stealth

Von would find Chipz stalking him around to various locations and he was eventually accused by him for being involved in some nefarious "evil". Once in a graveyard speaking to some ghastly apparition and another standing on the roof of the academy, speaking in a foreign language to the crystal beacon that powers the barrier that protects the school. [4]

Together with Kareeda he caught students passing through the school barrier, warning them not to cross it, that it's there for their protection and passing through it sets off alarms.

Von would catch Chipz on another occasion once again when he was on the roof speaking to the beacon crystal. This time he had Speca Eldrin and Irinarya in tow, hiding. When he noticed Chipz he was prodded with questions and he explained that the crystal has great power and if disturbed could crack or have its integrity damaged and that his reasons were concerns for its safety - it being a vital part of securing the magic at the school.

Chipz consequently pushed him with various verbal insults - for sneaking away to have smoke breaks - making fun of his strained voice, moving close to poke the crystal with his finger, teasing him for going for a bad look not fit to impress any ladies and "needing a snickers" to improve his temper. Having been previously provoked by Esmae and Irinarya and warned that students making him his loose temper was not in their best interest - Von finally lost it and tore off his mask. Without the mask he revealed the bloodied and scarred face of the "vessel" that he possesses.[5]

The students spying, Chipz, Speca, Eldrin and Iranarya ran away and would agree not to tell anyone of what they saw. Von would later tell Kareeda of what had transpired and that his intention was not to scare the students.

After his previous outburst Von opened up to Chipz offering some guidance regarding his "sneaking about", admitting to not really minding it but rather criticizing his lack of skill in going about undetected. His concern was him getting caught in a real situation when it really matters, being on a mission and sneaking up on someone powerful like a cult leader or another demon. Failure then would mean death. Seeming to open up he eventually shared some details about his personal life.[6]

Return to The Hellscape

Von was suddenly absent at the Academy which Kareeda explained as him returning to The Hellscape to solve his anger management issues.

Lila claims that she overheard Von ranting to himself about some rune he got with him from the Hellscape. From his mumbling he is apparently supposed to fulfill something for the person who gave him the rune, and mentioned something "*unintelligable* have been activated".

Feeling real pain again for the first time after a long absence Von was hit by a magical seizure that struck through his vessel - hitting his soul directly, causing him to grasp instinctively at his chest.

The attack occurred following him having interrogated Vevina, the spider girl had been trying to hide the truth regarding her clearly being intoxicated in class, not only lying herself but her classmates attempting to cover up for her. His attack came straight after she admitted to having imbibed someones blood causing her sickness along with alcohol, a drink which her species is not equipped to metabolize correctly.

Insisting that he was fine he disclosed some manner of worry to Headmaster Kareeda but offered no explanation to it while valiantly suffering through his episode.[7]

In truth the pain he suffered was caused by the rune that he is carrying. He shared this only with Vevina.

He shared a story only with Vevina regarding his past together with one of her kind eliminating a mercenary group named "The Red Solstice" and his personal life because he believes them to share a common will. Being similar they share the will not to be feared or cause fear but are often feared regardless, and only to kill those who deserve it. For sharing his story she gave him a blessing and he offered her to ask him for anything, should she ever need it.[8]

He has an unknown sister who retains her "real form" being a "Greater Demon". She is of the same species as him but keeps a physical form who is all metal. He describes her as "all but a soul controlling a metal form". She practices hemomancy and can not be driven mad from using it, since she has no blood in her own body. Being a creature consisting of metal, devoid of blood, one would assume that she requires living sacrifices in order to practice her craft. She is not as compassionate as him.

Von was once together with a human woman who was his former partner or possibly lover. She is now deceased. They met when she was wielding a blade in combat and didn't respond with fear to seeing his real form.[9]

The vessel is the body of a human which Vondanen possess, he controls him completely and claims that very little remains of the person from before. The vessel is logically - "already dead".

When he speaks it is that of his vessels voice, not his true voice.

His vessel was once an honorful and intelligent man that started dabbling in hallucinogenic potions and he slipped up by catching a whiff of something dangerous, his mind was never the same after it and he lost his sanity. He took the mask up and stitched it to his face. Why he did this might be because he had an out of body experience, not thinking he was who the thought he was or possibly he was taken over by some other entity. They could also have attempted to practice hemomancy, known as "blood magic", which tends to drive human practitioners mad.

When his vessel first noticed that he was being possessed he was actually wise enough to know what to do and reached for a soul binding crystal to try and capture Von but was not fast enough.

A truth he seldom shares is that possessing a vessel works two ways - he can read his memories and thoughts but his personality also bleeds into himself and back, meaning a part of the vessel has also become a part of Von's own personality. This is a secret he has only shared with Vevina.

Without a vessel his form would be incorporeal and have to continue searching until finding a new vessel.

To Vevina he shared a story of his past. He was sent from The Hellscape in secret to eliminate every member in a company of human mercenaries named "The Red Solstice" who wandered on nomadic missions to burn most things non-human, including demons and Bugkin.

One time he came across one of their camps with 4 prisoners trapped in cages where one of them was a "Milker" (?) named "Geisheous Sai" (spelling?) of Vevinas species who had watched their brethren burn and wanted revenge and offered him his undying loyalty if he was released. Von only asking him to keep his identity secret and fight alongside him the werespider gave him a silver amulet in the shape of a spider with a red gemstone on the thorax, to seal their bond. The amulet had an engraving saying "Of desire and honor". He started killing at once when released. Together they defeated countless camps and Von would eventually return his amulet appreciating his discretion. Eventually "Geisheous Sai" died fighting in combat and Von would return the amulet to his family in secret to remain anonymous.[10] 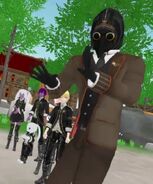 Professor Vondanen guiding the students around campus on their initiation day. 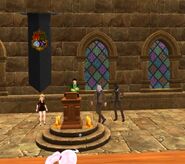 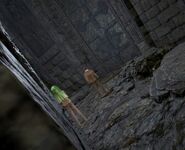 Vondanen and Professor Willow inspect a giant door in a crystal cave.

What is he doing?

Armed with a large sword.

Spotted in a cemetery speaking to some ghastly apparition. 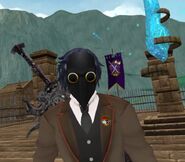 Masked without his hood 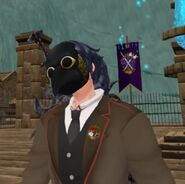 Tearing off his mask 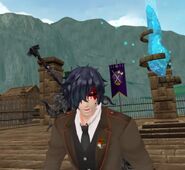 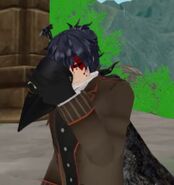 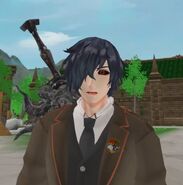 Von without his facemask

Von in his restored body 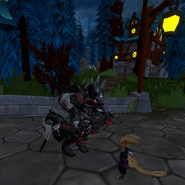 Von speaking with Lnik during the third Camp Cari mission.

Von chilling in the Aldoria Camp

von in the meeting post-Aldoria