Not to be confused with: Mute

"They're not pets! It's a mutual agreement. You are the voice of the mute and you give the mute attention, they're silenced beings who can't speak and in return they give you love, affection and simp content. It's mutual bonding, not bondage. You can't f*ck your mute." ― Roflgator[1][2]

Having a personal mute is a part meme, part insult and part praise that all depends on the context. A personal mute can be said to be a "sidekick" in a way. Most of the arrangements are mutual and are usually some form of roleplaying. They may even be of a romantic nature similar to shipping.

The personal mute meta in 2021 has evolved from being mostly a meme to being a partnership to entertain while live-streaming. It is often described by Roflgator as a way for male streamers to provide VTuber-like "simp content" on their streams without wearing female avatars themselves.

A "personal mute" should NOT be confused with being a "mute" in VRChat, who are simply players who either can't speak or decide not to speak. This article is about the "personal mute" meme.

Being a personal mute means that you follow a person around acting and reacting to the person you are following in some manner. You can be quirky, friendly or outright hostile and violent.

Having a personal mute means they follow you around and the arrangement can involve multiple "personal mutes".

The personal mute bond is a partnership, not slavery and any such suggestion is highly frowned upon. It is generally regarded as really bad to engage in ERP with your mute.

Fitting the definition of a "personal mute" goes back historically as far as VRChat history in 2018 but wasn't cemented until Roflgator coined and popularized the term when he asked Zager to become his personal mute to "act quirky and cute" to his Twitch stream on Mar 4th 2020.[3] Zager as the first "personal mute" would later be rejected as Roflgator replaced her with Dotty.[4]

On July 2nd 2020, the elected bricktown president AskJoshy voided all current mute contracts, and the mutes were allowed to re-select their partners or become independent.

Starting July 6th 2020 Rob would host weekly mute adventures with as many mutes as he could muster plus a couple talkers. Together they explored around the varied worlds of VRChat.

On July 24th 2020 Roflgator hosted a mute competition called "Who wants to be a mute for a millionaire?" for Sodapoppin to find his own personal mute.

In July into Aug the personal mute meta spread outside of VRChat into various Just chatting and variety Twitch streamers such as Mizkif and Moonmoon.[5][6]

On Sept 7th 2020 Rob added a "mute cam" to his Twitch stream webcam with both Blu Haze and Firefox Blue. Breaking the fourth wall of the mute meta.[7] On Oct 4th 2020 after Roflgators encouragement, Sodapoppin created a similar "mute camera" for his stream with Happy Thoughts.[8]

Streamer Shroud found out about the mute meta and expressed wanting to acquire his own personal mute partnership after watching Sodapoppins stream.[9]

On Oct 16th 2020 another mute competition was hosted where MoonMoon was the one searching for his personal mute. During the event Sodapoppin, Vigor and Esfand attended as onlookers.

On Nov 21st 2020, DotTaiga was found to have become mute, and so they took the mute oath and became Moxy's mute partner.

After having discussions on stream on June 22nd 2021 Roflgator considered how bad the "personal mute" meme had become. Instead of being a stream mascot, which was his intended purpose, players who do not stream started using the bond as a form of negative power dynamic or to collect them as trophies. This causing discomfort for some pairings or it being taken too seriously like real relationships as in not wanting to "cheat" on your mute partner when it's all just a joke in the first place. Admitting he was wrong to push and popularize the meme when it turned into something outside of his control he expressed wanting to abolish it completely. 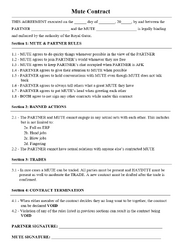 Example of a mute contract (this is a meme by Drunkenpig) 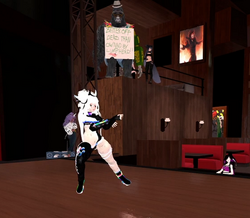 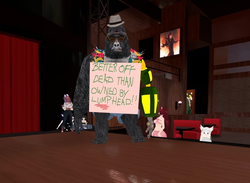 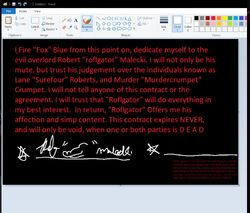