"I promise to take care of you, I wont let them hurt you. " ― Pepper to Ryzy, making a pinkie promise

"I won't let you do anything to him." ― Pepper protecting Duncyn, her last moments.

Former Owner and Barkeep of the Stray Dog

Pepper Alex Ly was a demi-human made from dna-splicing with wolves and, after being torn apart, had several cybernetic limbs. Before, she was an aspiring young adult with a great job and a love for blogging. Thrown away mentally, Pepper was a barkeep who ran the bar "The Stray Dog" in the Wasteland.

She kept to herself and was most likely never caught outside of the bar. What happened to her in the past ruined her and she planned to hide as much as she could. Pepper was friends with only a few of the Wastelanders, though it would seem she was slowly coming out of her shell.

Pepper's last episode. Pepper joined the Synth group heading into the wasteland at the direction of BR-16. After Titan awoke under the sands of the Wasteland, the synths detected incoming organics on a scrapping mission and attacked. Duncyn was with the synth group, panicked when he learned he might be used as an organic sacrifice and ran to the scrappers. Pepper followed in an attempt to protect Duncyn, shooting at Verlassene- she didn't realize Vee had resisted Titan's possession and was also trying to protect Duncyn. She got in a standoff with a possessed C3-BURN who shot her multiple times. Seriously wounded, Pepper wandered into the desert, where the scrappers tried to help her. She wouldn't accept their help and tried to return to Duncyn before collapsing. Ryzy came back for her and carried her to the rest of the scrappers, and eventually back to town. Juno and Hank attempted to treat her at the hospital, but she had already lost too much blood.

She died from her body failing, due to too many gunshot wounds to her torso, may she rest in paradise.

Pepper at the bar

With the injured Ash as C3-Burn treats her

Recovering blood plasma from Dash Spacer to save Ryzy 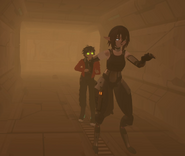 Protecting Duncyn, standing in the way for the synths that turned hostile under the influence of the A.I. Titan

Standing in front of the Synths that would harm Duncyn

Standing in front of the Synths that would harm Duncyn

Taking up arms against the hostile synths

Sheila hosts the funeral communing with Pepper and Ash's spirits