Ophani's species is not well known to the current generation. At one point in their life, the bipedal magical creature was separated from their fellow species. Barely able to survive on their own and with no knowledge of this strange, cyberpunk planet, they sought out help from a kind old rune smith human who took them in and taught them the skills needed.

With the status of Callous Row, having no rune smith and in dire need of more magic users, Ophani got the word from the travelling talisman merchant (Rei) that they should head there next in the upcoming year. 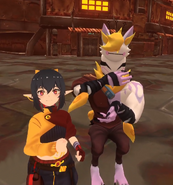