Male
Odd is a tiefling who works in the Oasis Grille in Scrap Town. He lives in the Wasteland with Hadwyn Ermire, and is known to make frequent trips between the Wasteland and the Undercity.

A former thief, Odd is now trying to find a new path in his life and has begun to rekindle a long lost interest in magic.[1]

Odd was born on the streets. A hard life, a couple of reluctant mentors, and a few tricks picked up for survival molded Odd into the resourceful street-rat he is today. Taking any window or door (locked or unlocked) as an opportunity.

As a child, he would occasionally run into kind-hearted folk who treated him warmly despite his place, leading him to occasionally be caught returning some of his bounty to them or even stealing back from other ruffians. Along the way, he picked up a knack for magic, but it never amounted to more than a few small spells to help with his heists. After rubbing a few higher-ups the wrong way on his previous turf, he managed to slink his way through the shadows, eventually ending up in The Row.

When he was a resident of The Row his intentions were basic survival and gathering the funds for a ship to travel off-world. Instead he ended up in the wasteland, in the settlement and community of Scrap Town.

Odd is caught by Lange, stealing supplies in the Sweet shop 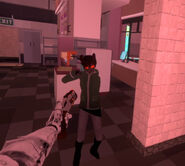 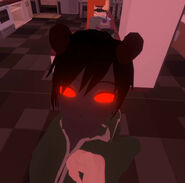 Odd stands in at the restaurant