Oathmeal is a content creator and explorer of VRChat.

She has recently started to stream these adventures on both YouTube and on Twitch, usually in the company of Klaus, a very close friend.

Known for her dancing, and her signature glow stick twirl, Oathmeal wanders the lands of VRChat looking for anything fun.

Like the VRChat Community Discord and Joey Bagels, Oathmeal has her own fan Discord.

In a previous Cycle, Oathmeal and Lanfear's parents were offered the role of "Guardians", however, they were either not fit for the role, or failed at something. To protect their children, they made a deal with a powerful being, Kimple's Father, who offered them the Lockets in order to ensure the two would survive the Cycles.

These lockets came at a price, however. At the tender age of 16, Oathmeal's voice, well known for its melodies, as well as Lanfear's own voice, was silenced for good. Now with KimplE assigned as the two's guardian, their Parents were left back in the past Cycle.

Oathmeal, panicking that her voice was gone, her parents gone, and with her sister in the same predicament, made the choice to run away from the estate. As soon as the new Cycle began, Oathmeal ran from her home in the middle of the night. (Not the "she didn't enjoy the life of the rich" theory like everyone thought.)

It's unknown what exactly transpired with Oathmeal while she was gone from home, but one day, suddenly, she reappeared in the world of the metaverse, documenting her adventures, apparently experiencing amnesia regarding her family. Meeting people like Klaus, Dounatsu, and even Joey Bagels, whom have helped her. She even met her future partners in romance, Crumbster, and Shimakaze, during this time.

Kimple, after a long absence in Lanfear's life, noted a neko with a locket just like hers was wandering around the Metaverse. When Lanfear heard this she instantly 'hired' Kimple to get them together, in which the wise Kittybot did.

It was revealed on May 26th, 2018 by Lanfear, who whisked Oathmeal away to, of all places, Kimple's Father's domain, that the two had some sort of connection with the Kittybot the whole time. Lanfear went on, recalling about how their parents took them both there at 16, and, a secret of some sort, was involved, making the two nekos lose their voice. This upset Oathmeal so much she ran away from home. It is speculated that both Lanfear and Oathmeal's lockets hold some magic power that keeps them safe as long as they're together. However, when Oathmeal lost her beautiful singing voice, Lanfear felt like she was the one to blame for it.

Oathmeal and Lanfear left the comfort of their home to visit an island. It was revealed the two had frequented this island and it's speculated it was owned by the Lanfear family at some point. After a trip of nostalgia, Lanfear revealed that Oathmeal used to hop on the biggest rock in the area, just to sing her cat heart out. It was around that fabled time that Oathmeal and Lanfear were turned mute to protect them by none other then KimplE's father and mother, with KimplE serving as some sort of guardian angel.

Lanfear sadly remembered how after Oathmeal ran away from home, the elder of the duo kept sneaking back to the island in desperate hopes that the younger would be there.

More drastic events happened after the two visited their group of close friends and Oathmeal's fiance before they traveled to Chipz's company. (For more details, see the Crossover Chronicle). After the usual bout of getting told by both sides that they're the cause of a possible war, Kimple took the two of them to her native home, the Void, where she revealed many important things to them.

Despite not being present for most of the events (due to IRL work and getting prepared to make the journey of full time Content Creator.), Oathmeal was present at the 'finale' of the whole Crossover Chronicle, where she and her sister just after Chipz fought KimplE to become their Guardian. Sadly, due to fading still, Chipz willingly handed the responsibility to Joey Bagels. He is now the Guardian of the two, replacing KimplE. The two then unlocked the next Cycle, where Oathmeal was present at Club Rogue before Kuri, Ikrium and Zentreya rushed the club. (This event was avoided due to Joey walking in and calmly taking Lanfear on a date.).

Oathmeal seems to have more memories of the Past Cycle, unlike her sister, but many spots are foggy and blank.

After Oathmeal, with funds from her sister, and urging from Kohrean, Shimakaze and LilBagel, opened a club, the Neko Nights NightClub! Lanfear oversees the clubs fundings, while Oathmeal keeps up the public relations. (Though both enjoy to party with the people.)

Oathmeal is enjoying the time she spends with Lanfear, exploring the VRChat world, hanging out with friends, having private parties at the Estate and at Neko Nights Night Club. Though Crumbster, her fiance, is waiting for her to buy or even rent a wedding dress so 'the job can be done'. The two have recently gone their own ways.

Oathmeal and Lanfear share a very strong bond. It's theorized, before being separated, the two were almost joined at the hip. They know each other's emotions so well that they can almost predict what the other one would do.

When the two of them are drinking together, they become even closer, to the point of huddling together for support. When scrolling through the Lanfear Estate's archives, it was found that the two snuggled together under apple trees while the estate was being re-furnished while very young.

However, since Joey officially became the Guardian of both Lanfear and Oathmeal, the two sisters seem to have grown even closer, with Joey and Oath even becoming more than just 'friendly rivals', as he now sees her as a true possible little sister. The two still tease and bully each other.

Since reuniting with Lanfear, Oathmeal became an aunt instantly to Mad, Andis and Egg. She loves her nieces and nephews dearly. She even enjoys the company of Summit, even if she thinks the mini neko is weird.

But the fact she's bundled with all these nieces and nephews. Oathmeal has expressed NO interest in becoming a mother.

Recently due to Crumbster quitting the game Oathmeal is no longer engaged to him and is currently only engaged to Shima and Kohrean as of now.

Like her sister, Oathmeal has semi-supernatural powers, but unlike her, is more willing to use these powers as she sees fit.

Oathmeal, Lanfear and Kimple, the Three Kittens of VRChat. 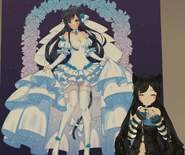 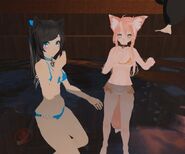 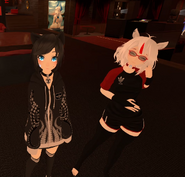 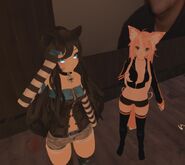 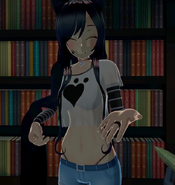 in her new dress from MDG

the holiday version of the dress from MDG

Oathmeal playing pool
Add a photo to this gallery
Retrieved from "https://vrchat-legends.fandom.com/wiki/Oathmeal?oldid=94012"
Community content is available under CC-BY-SA unless otherwise noted.