"It's f-king lasagna bitch!" ― Nuts, yelling at a waitress

Married to Chipz (In a previous, abandoned story-line)

Nuts is one of the many people who love the world of VRChat and roleplays (RPs) with the community. She is probably most known for portraying Chipz's original psychotic girlfriend. Fitting the perfect definition description of a Japanese "yandere" character.

She originally used a Kizuna AI avatar, but has since expanded to more characters when playing VRChat or roleplaying.

Nut's in-character Kizuna AI avatar persona is known to be very vulgar, sometimes offensive and should not be confused with the real player.

Lore/Biography of the Kizuna AI persona

Nut's speaks robotically and usually acts as if completely unknowing to social cues or norms in her surroundings. One of her signature moves is crawling on the ground.

She often expresses herself in strange ways and mixes up different human conditions, situations, and differences. For example being pregnant without having sex or having a penis without being male. As to her apparent 'endowment downstairs,' only Chipz truly knows.

It's been theorized that she is actually a type of human-like robot (android) but it's never been confirmed. If the android theory is correct her behavior could all be a part of her programming attempting to fit into human surroundings.

Nuts met Chipz for the first time during his public serenades at The Great Pug. After being serenaded together with Vore (who was using a different character name at the time) she immediately expressed her undying love for Chipz.

Between Nuts obsessiveness and stalker-like nature towards Chipz, their love and chaotic relationship suffered many challenges before becoming official.

Chipz and Nuts had a beautiful traditional wedding getting married on Jan 28th. GreatKhanHD was the acting minister and many other known VRChat personalities attended.

The end of #nipz, and the Kizuna AI persona

The 'Nuts and Chipz' (#Nipz) roleplay storyline arc was eventually abandoned. Instead of ending the storyline with a divorce or drama in some way both agreed to let their characters stay together and live on in a separate universe and 'reset' the current storyline as if their characters never met.

Occasionally Nuts has been seen in VRChat roleplaying with aspects reminiscent of her old character but none of it is considered 'canon' to the previous abandoned 'Chipz and Nuts' storyline.

Nuts seemed to have 'sisters' back in her Kizuna AI days, as a trio of them appeared on stage in the MMD Club, and even Kara Corvus had a Nuts form. To distinguish herself from the other Kizuna AIs, Nuts spoke in a more robotic tone, unless she got excited or angry. If the theory of being an Android is true, they could be from the same production line or similar models.

Nuts married her fiance Vigor at the Blue Man Cult church on June 7th, 2018. GreatKhanHD ministered; Roflgator "Rob" acted as Nuts' dad and Buza was Vigor's best man. Rob offered his room for them to ERP in, but it was constantly interrupted by a drunk Laughing Jack, Vince, and others.

On Feb 21st, 2019 - more than a year since breaking with Chipz (in a previously abandoned story arc) she met Chipz once more - this time seeing him together with 'Emi' Emiyuh.

Crawling on the ground she appeared from behind the curtains in an Open Mic Night and accused him of leaving her and explained that she had been lying under a couch during all this time "shitposting on Twitter".

Chipz told her that he had moved on since her time away and was now seeing someone else - eyeing at Emi. At this Nuts jokingly hinted at having a "night" together with Emi herself, probably to poke fun at him.

For the importance of correctly documenting lore the "couch" she was hiding under was the original one in the back where the first Chipz episode took place and he was put in the position of choosing between multiple women. The Bachelor style "Casting an E Girlfriend" was the beginning of a grand adventure and much roleplay. From her time together with the couch she now considers it her new lover. For old times sake Chipz gave her one last "Simmer" with a head-pat.

A Visit to The Royal Gator

During another return to VRChat on Aug 7th, 2019 Nuts was visited by Roflgator. After telling her that he missed her (in a way) he invited her to stop by his place later which she did. She came by his bar The Royal Gator as a guest and was given a tour and introduced to it's diverse patrons, clientele and workers.

Twitch Highlight - A Nuts episode at The Royal Gator

She met the penguin greeter Wooks, got an intimate dance of sorts from the male dancer Daddy Squint, met a strange monster in the bathroom sewers, told Rob about the couch she had been hiding underneath during her time away but was eventually introduced to someone that she didn't like at all. Being upset she demanded a refund but Rob convinced her not to leave and said that he would do anything to make up for upsetting her - to which she responded that she wanted ownership of the bar - after some dealing he agreed to make her the boss for the day.

As the newly appointed boss Nuts first decision was to enforce the hiring of more strippers. She tried to get the eloquent Murder Crumpet and the loud bartender Emerysaur circumcised but in failing to satisfy she fired Rob. To rehire him she demanded "virgins". She randomly and suddenly resigned her position to only later deny having done so.

Later she demanded someone to have sex with and was oddly specific, asking for a date with "an amputee with a nice smile and painted nails". Rob tried to get her something as closely as possible by having Foreigner fake being an amputee by hiding his legs behind a couch. His advances towards Nuts failed completely when he tried to fake being Norwegian, instead she said that she liked "the boy-girl", meaning S0ra. She made him very uncomfortable demanding him to have sex with her and S0ra was visibly shifting nervously repeating that he is "very married".

Looking elsewhere she was introduced to zMoonrunner instead and vulgarly suggested advances that involved "pegging" him, at first this scared him away but he eventually agreed to go with her on a date. Their date was a very strange thing. "Incel" Meech started to serenade them but Nuts interrupted him and told him to shut up which filled him with rage. Moon came to her aid by beating Meech in a fight seemingly against all odds. The date eventually turned into a double date together with Gapp and his girlfriend MadLuna, admiring her suggestive "clothing" before the end of the night.

Shonzo created an avatar for her with large ears and googles that she usually use when out-of-character, chilling or random RP stuff when playing VRChat.

WIKI: Does Nuts refer to this avatar/character/persona with a name in some way, if it has one?

OG Nuts talking to Chipz in the Neir map. 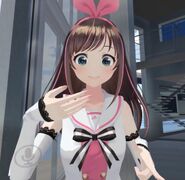 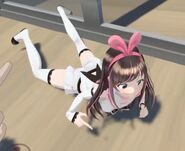 OG Nuts crawling on the ground

Nuts and her brother during her wedding with Chipz. Pokelawls and Vince can be seen in the background

Nuts and Vigors wedding in the chapel of Blue Man 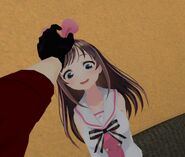 One last "Simmer" from Chipz. 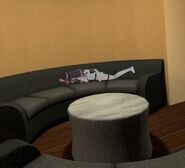 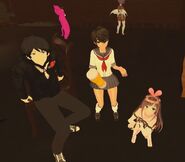 Chatting with Dango and Sorry.

Moon and Nuts on an awkward date.

Gapp looks on as MadLuna and Nuts get acquainted.
Add a photo to this gallery
Retrieved from "https://vrchat-legends.fandom.com/wiki/Nuts?oldid=94120"
Community content is available under CC-BY-SA unless otherwise noted.