"Excuse me, investor coming through!" ― Norman

NotoriousNorman is a roleplayer and Twitch streamer known for his GTA5 RP on NoPixel mainly portraying the character Chips Ahoy.

In VRChat he portrays the "businessman" and "investor" Norman, who wears sunglasses indoors and his signature - not at all - inconspicuous pink hat. It's a bit unclear exactly what his business entails, giving him a shady reputation. Whenever he's questioned about it he never gives any clear cut responses other than "investments".

Ever since his first visit he quickly became a regular at The Golden Gator 2020.

Norman wearing his signature hat and sunglasses first appeared at The Golden Gator 2020 on July 11th 2020 asking to have a meeting with the proprietor in order to offer him an investment deal and a potentially very lucrative business opportunity. Being directed to "Rob" Roflgator as the owner of the establishment with the co-owners MurderCrumpet and Jor Rilla he has continuously been juggled around and never actually gotten to meet him in any official capacity, at least not without getting interrupted. Unknown to him Rob suspected he was homeless and lacking any actual money to invest into anything and is intentionally stalling their talks every moment he gets.

On July 29th he participated in a The Golden Gator game night when the current theme was a play featuring "Spiderman RP". The effort turned out really scuffed.

After getting his promised meeting delayed repeatedly again he got unusually rowdy and confrontational after having had some wine on July 31st. He ending up getting the opposite attention from Rob and his words twisted into sounding like he insinuated that Blu Haze would need a boob-job and various other insults while that was not really what he said. The only way his actions would be forgiven was if he agreed to give up his soul to the succubus Blu Haze as payment for insulting her.

He listened to a rant of how he didn't need to worry at all since he wont suffer any consequences of losing his soul until he actually dies. Agreeing hesitantly to go along with whatever was about to happen, how the succubus would supposedly be in control of all his pains and pleasures, yada yada until he eventually keels over. To his perhaps surprise she reached into and him and actually ripped his soul out from him, leaving him shocked and face down.

On Jan 5th 2021 he competed against the other bachelors Penta, KuriGames, Mute Max and M0xyy in a speed-dating competition where participants portrayed various characters. 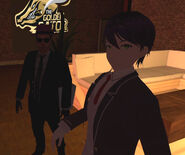 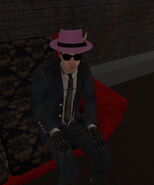 Waiting on that meeting... 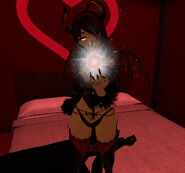 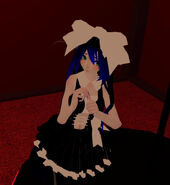 Shadow person? Or "burn victim"? (Krispey) with the confused Norman 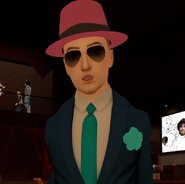 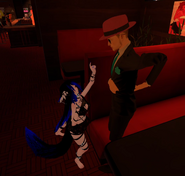 With Penta during a speed dating-competition

In Robs office with Lex Go and Dento

Norman in his business office 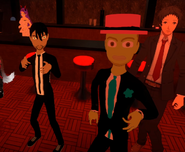 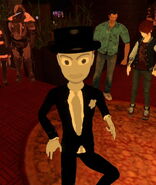 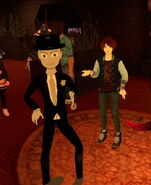 Norman and Vicse
Community content is available under CC-BY-SA unless otherwise noted.