Norman Flint is a Talaris Asset Manager operating out of Callous Row. He is trained in the acquisition and reclamation of magical 'assets' and employs shadow magic as a means of operating covertly throughout the city.

Not much is known about Norman's past prior to his employment at Talaris. He claims to have been born on Corvanis 3 in a slum much like Callous Row where he was raised by his sickly mother.

Norman was stationed in Callous Row shortly after the lock-down was lifted. He was meant to rendezvous with the local Talaris Lieutenant and assist him in expanding Talaris' influence within the Row. However,he found that the Lieutenant was MIA upon arrival. Operating solo and without much in the way of orders, Norman began surveying the local populace for potential allies, informants, and assets.

He has since ingratiated himself with the Mayor, who has brought him on as a sort of 'advisor' to the bank, as well as formed a contract with Friend, a magical creature and ex-Talaris experiment who Norman has brought back into the fold, for better or worse. (More TBA)

Showing his ID to Lange Pliskin 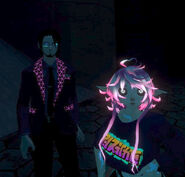 Norman gets stabbed by a possessed knife
Community content is available under CC-BY-SA unless otherwise noted.
Advertisement