Shroe Dinger (Former master who kept her as a slave, worked for Trident) (Deceased)

Companion/Brothel worker at The Dirty Diamond

Blue with purple hues
Nia is a lower-class brothel worker with a dark past of having been a victim of slavery, kept as a pet and abused by her masters.

She still suffers from the trauma today and has difficulty dealing with men at all, making her job at the brothel problematic. Dulling her senses with alcohol and drugs isn't the best option but it works for now.

Being discarded by her master she finds herself exploring the secrets and magic of The Row, the slums shaded in constant darkness of the enormous metropolis of Salvation City.

Born into a life of slavery, Nia has never known life as a free person. She was only seen as an object, and a source of entertainment for the rich socialites that surrounded her. She was bought by a higher up of the Trident corp known as Shroe Dinger, a man whose true identity and past life remains in shadows and whispers. For Nia this didn’t matter as she was raised to obey whoever she was told.

Shroe brought her along for every trip and job he went on, and this was why she was well known by Trident Corp. As a pet she helped entertain Shroe and his colleagues during business meets and galas. She found this life more bearable than her previous servitude, as she was spoiled for the most part by Shroe.

Nia fell hard for her master at first, who treated her almost like a princess, spoiling her with gifts and treats. She had learned to obey him and his commands, as she was rewarded with his affection and what she thought, was genuine love. This was up until she was ordered to do things she wasn’t comfortable with, and was met with harsh punishments, what normal morally guided people would view as physical and mental abuse. One day she found another girl around her age, with dog like features that lived in a nearby market to where Shroe parked his vessel.

As Nia was given more free reign when Shroe was busy with work, she got to sneak out and spend time with the girl, who was named Niko. As she spent more and more time with her, they fell in love. Knowing their longing for one other was taboo and not allowed by rule of Dinger, they snuck out in secret. Eventually caught in the act, Niko was found to be a runaway pet in hiding and was returned to her master. Nia was reprimanded by Shroe with threats and even more abuse. Nia begged for forgiveness and pleaded to see Niko to see if she was okay, but that was it.

Shroe, tired of Nia’s crying tricked her into thinking that he had forgiven her, and would allow her and Niko to be able to stay together as his pets, and that they would be going on a trip to pick her up. His guards led her into a room on his ship, that was actually a giant airlock. After locking her in, he revealed that he never was going to let her be with that “trashy dog” and without warning released her over the wastes, her only reason for surviving being the trash and bodies she landed on.

Nia slowly, but surely found her way to The Row and was taken in by the brothel for the time being.

Shortly after getting employed by Kee'ra, the woman running the brothel "The Dirty Diamond", she got mixed up in a hostage situation. The brothel had been harboring Alfons, a wanted individual who formerly worked for the Trident Corporation as a journalist but lost his good graces ending with them on bad terms.

Disguised he had been hiding from a huge bounty being placed on his head by his former employers. Eventually an assassination cyborg (portrayed by Arcadum) had learned about his location and paid the brothel a visit, aiming to collect. Knowing that Alfons were there previously the cyborg takes Nia hostage while it sends Raleigh out to retrieve him and lure him back. Nia suffering from her past trauma as a slave freaks out but manages to keep her calm somehow through the ordeal.

The assassination cyborgs plan eventually fails and when the mushroom alien Big Conk appears accompanied with backup and they together overpower and destroys the assassin.[1] 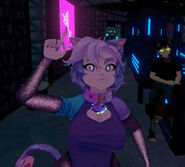 Ordering a drink at The Grindstone bar