Male
Nash Quentin is a gunslinger and mercenary for hire who betrayed his commander and former mercenary band when they did a morally questionable job for the TALARIS Corporation.

Escaping from his mission and obligations he made his way to the slums of Callous Row, located in the shadows of the metropolis Savior City on the planet Corvanis 3. Attempting to start over and surviving here turns out to be as eventful and difficult as his previous missions.

He is portrayed by Cidd.

Captured and raised by Hellbats

Nash was born into a family of traders. He was orphaned at the young age of 8 when his parents' caravan was raided by a mercenary group known as the Hellbats. After trying to defend his parents against the mercenaries, they took pity on Nash and took him in as one of their own.

Nash lived most of his life as a mercenary under the name Jesse which was given to him by the Hellbat commander himself. He became very close with a member known as Marshall who was the young but extremely talented mechanic of the group. For the next 10 years he trained alongside Marshall who was not much older than Nash. Both of the boys dreamed of one day escaping the group that had taken them from both of their families, finding their own ship, and exploring the stars as a dynamic duo. Nash proved to have a knack for sharpshooting with revolvers and was an asset to the group in increasingly dangerous missions. Nash sustained many injuries and even lost an arm but was given a proper robotic arm by Marshall.

Nash’ life as a Hellbat came to an unfortunate end when he was allowed to participate in his first high bounty mission, capturing a powerful sorcerer known as Dutch. They set off with a squad of two other Hellbats including Marshall, who travelled with him for field repairs, and a small cargo ship supplied by the Corporation. After they caught Dutch they proceeded to take him to a meeting location on a deserted planet within the Corvanis system.

On the way as Nash and Marshall guarded the sorcerer, he managed to convince Nash of the corruptness of the TALARIS Corporation and their plans to experiment on him to learn the source of his powerful magic. After a heated argument they both decided to betray Talaris and the rest of the Hellbats and escort him back to his home.

They knocked out their other comrade and fired him off in an escape pod to a nearby moon, and they redirected their course to a moon colony just outside the Corvanis system where they could lie low. Unfortunately, a Talaris agent along with the entirety of the Hellbats located them within months of their arrival at the colony. As the trio tried to escape, Marshall was shot in the chest by the Hellbat commander and Dutch was captured by Talaris after shielding Nash just long enough for him to escape with his fallen friend. While escaping on the ship, Marshall whispered to Nash with his final breath: “Escape and live free now brother, for the both of us,” and he died in Nash’ arms.

Nash escaped the moon but was followed and shot down while near the orbit of an uninhabited junker planet. Soon after his pursuers presumed him dead and gave up their search. After crash-landing on the planet, he stayed and slowly repaired the damages of his ship over time with parts from other ruined vessels. After successfully repairing his ship, he travelled to many planets in search of work as a gun for hire. After many years of travelling the Corvanis system he found himself in Savior City on Corvanis 3. It was there that people had told him of a place known as Callous Row where he might find work without fear of Talaris or the Hellbats learning of his survival.

During his time in the Row Nash becomes good friends with two men in particular who arrived alongside him. One is known as Loch and another by the name of Warren. Nash befriends many people in the Row and even starts to develop romantic feelings for a Row member and Dirty Diamond owner known as Kee'Ra. Nash begins to gain trust with the Hellbat captain of the Row known by Nash simply as Captain Sharborough. The captain investigates Nash' past and informs him that the former group of Hellbats who raised him had since become the very Shadowbats terrorizing the Row. Nash ended season one taking over the late Captain's position as leader of the Hellbats in the Row and has plans to create a Facility where he might teach people how to prepare for and better survive the harsh conditions of life in the Row, as well as to hire the help of friends such as Duncyn, Dagu,Coach Eric, and many other citizens of the Row and Undercity, in order to build, fund, and help teach different classes and skills for all who are eager to come learn. Nash has sworn to keep the details of his former life and name a secret, as the TALARIS Corporation finding out he is still alive could lead to more trouble than Nash is ready to handle. The only people currently aware of his true name and former life in any detail are the Hellbats themselves. 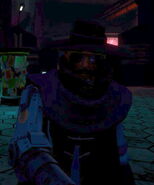 Joining the mission to rescue Loch from captivity from The Shadowbats 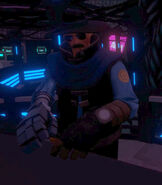 Nash offers his assistance to Rook 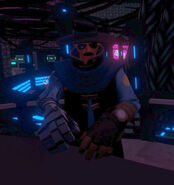 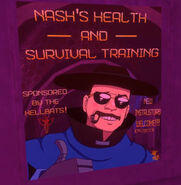 He and Warren assists Loch after he was shot
Add a photo to this gallery
Retrieved from "https://vrchat-legends.fandom.com/wiki/Nash_Quentin?oldid=88160"
Community content is available under CC-BY-SA unless otherwise noted.