Nano's form is a coherent construct of energy maintained by a small but steady drain of her own energy. To maintain her body she must have a minimal amount of energy. Should she be drained under that limit, she will lose her form, much like a derez of Hybris.

Nanoade is a VRC Twitch Streamer from late January 2018 that focuses mainly on messing around in lobbies with friends while also dipping in to Karaoke maps from time to time.

In Roleplay, Nanoade is a medium-to-short (or just short) humanoid figure and the adopted daughter of Chipz.

Usually, most anyone, just meeting Nanoade for the first time, would find her to be a generally short, somewhat sensitive and cute individual with an english accent in her speech. Although, she is not to be treated too lightly. And with this, it should also be additionally noted that she has attempted murder before ('RP btw').

Just after the ending of season 1 (Of Chipz's RP), with the Chipz and Nuts wedding, Chipz and Nuts found Nanoade in The Great Pug. Upon meeting Nanoade, they then decided to adopt her as their new young daughter.

As time went on, Chipz and Nuts eventually separated (Also, due to the timeline being altered by Chipz), which left Nanoade just under the parental watch of her father Chipz as she was left without a mother. This then left Nanoade to attempt pleading much more for her father's attention, but partially receiving it, as Chipz was busy reorganizing his life and maintaining his first harem since his separation.

Eventually though, Nanoade did become more independent after growing through her early teenager stages, but not before expressing much teenage-angst on the way, 'pleading much for her father's attention', 'acting out in rage in public' and 'attempting to kill her new young adopted Wolf Sibling Sisters ("The Wolf Twins" or "Wolf Triplets") out of jealousy for them taking away her father's attention with their cuteness'.

But, again, despite her teenage-angst, Nanoade has since changed from then (might have) and most everyone still has yet to hear back on what happened to her Wolf Sibling Sisters.

Not long after turning 15, Nano decided to pursue her own adventures, leaving to study at a small boarding school to where she delved a little into magical arts and basic studies.. After being MIA for a few months, she made a sudden comeback and during this time, Chipz had made a name for himself with running his own Club. Her sudden appearance wasn't entirely wanted due to the dangerous atmosphere and it soon became clear that her father wanted Nano to stay as far away as possible. Abiding by her fathers' wishes at first, Nano tried her best to stay away before coming in contact with Arcadum, who had agreed to train her. It soon became obvious that Arcadum's runes were fading which led Nano and a number of others on a quest to help save Arcadum, ending with him passing on his runes to those that followed him. Nano, was then gifted with Arcadum's rune of Hellfire.

Sometime after this, a major fallout happened with SciFri and Chipz. After SciFri and his group of friends were told to keep Nano away from both themselves and any sort of danger, it was found to be that she had still somehow clung herself onto them. Chipz, enraged at this point, lectured SciFri about how no one should go behind his back when it comes to his family and tossed SciFri aside soon after. This led to the group forming within Folkona's 'Safe Haven' with Nano. When Nano mentioned how cool it'd be for the group to have a name, Folkona stated 'The Renegades' and thus that's how the group was originally formed.

After sometime within their presence, and more so as just a lost child, Nano soon ran into Azreal and Beedle Vaughx. Both of whom stated they would be more than happy to train her. Azreal, being an Archangel, stated he would help her grow stronger within combat after Nano had explained how she wanted to grow her powers in order to both; protect Chipz and show her father that she's stronger than he thinks.

Being her naive self, Nano accepted a bet with Beedle Vaughx; To find a star phoenix. Having all of her lifetime to accomplish this due to the rareness of said phoenix, it was proven that if she failed or decided to not continue then this would lead into the forfeit of her soul. It was stated that the feather on Beedle's hat was also that of a Star Phoenix's, although the power of a Phoenix was so great it had nearly killed him. If Nano was to find one, then she was to not approach it in any way; but rather inform Beedle of its' location.

Nano spent a large amount of time with help from Azreal and Miss Universe in search of this phoenix and upon finding it, it was seen to have been that of one that had almost hatched. Meaning the powers were harvested much easier into a single feather which was then gifted to Nano as a token of her hard work by Beedle. Unknowingly, this feather's magical properties had bounded to her soul and whilst it may have looked to be a ordinary feather; it was the single thing that would have later 'saved' her life.

On the 17th July, Nano's long-awaited birthday took place and she decided to spend it with The Renegades after not being able to contact her father. Herself, Beedle, Oblivious, Azreal and Satchi hopped to different places for the day - leading onto treating her to a small party before finally resorting to Forest Grove for the latter part of the day. It was clear that this was the happiest that Nano had been seen after the last few tough months she had been through and stated that The Renegades felt like a family to her.

Unfortunately, not long after - The Don had made his way into the Forest in search of Nano. Putting up a fake facade at first and fooling the group to show that he was there in good spirit for her birthday, it soon ended in him stabbing Nano through the heart before escaping. Nano died in the arms of Satchi, whom she stated previously was similar to that of a Big Brother to her.

Unknowing to the others at the time, Beedle had soon started to see her ember and the star phoenix had begun to slowly merge it's properties with Nano's soul. Azreal, being a guardian soon stated that he had known that her death was going to happen and in previous cycles, Nano never lived past her 15th birthday. Only now with Beedle's meddling, this was the first instance where everything was different. Beedle, having to act fast after seeing her body ember, took her back to where she originally was staying and overlooked her transformation for the next three days where Nano then awoke in her new form, being greeted by Beedle and Azreal first.

Nano's rebirth - as "Micro" - was kept in secret for a month, with only The Guardians, Oblivious and Beedle originally aware. They still feared that The Don would come back for her if word had gotten out. It was also stated that it'd be best for her to remain away from anyone else for a while so Nano spent a month essentially locked away in The Observatory, the home that Beedle had given her which was proven to be the safest place.

Having to learn about who she now was, the overwhelming changes made it hard for Nano to cope with the fact that she was no longer Human. She no longer could eat normal food, had the need to sleep and her new form was actually that of a Phoenix. Her mind desired to look human but everything else for her was no longer the same. The rune Arcadum had gifted her had also passed on over to her new form and integrated into her powers which she currently still has no control over. Purges of hellfire would erupt from her form when in distress and are now beginning to pile up, the rune's power is currently greater than what she can handle so it wouldn't be long until it consumed her.

Those unaware had slowly begun to be told about Nano's death and Satchi, still grieving was trying his hardest to make Chipz aware of what had happened. But with Izanami and SciFri threatening Satchi and standing in his way, the news took a month until it finally forcefully reached its' way to Chipz. The same day, Nano was told that she could now show herself to The Renegades. With Folkona, Satchi and Bream now knowing of her return. Nano stated that she didn't want Chipz to find out that she was in fact, alive. Whether it be years down the line or never, she wasn't sure on when she would ever see him again and decided it'd be best for Chipz and those affiliated with him aside from The Renegades to believe that she was dead.

Currently, Nano is now struggling to deal with the negative reaction Satchi had to her return as well as not being able to understand or control her new powers. She is now aware that Chipz has been told of her death and although a part of her wants to say otherwise, she knows its' for the best for her to break ties with him for now.

Nano's Hellfire rune gifted by Arcadum was also something that had in a way, combined with her soul upon death. The rune now is not so much physical but now unknowingly to Nano is something that runs through her veins in a way. Although this means that she has Hellfire running through her body, she still has yet to learn how to control it and right now is only summoned when her emotions get out of control.

"The Monster" is a very big guy dressed as a typical Kitsune-like (fox-like) fashion using colors similar to Woops. He has a gluttonous obsession to food. If he isn't fed enough he risks going on a rampage and will eat anything and anybody in his path.

He visited The Comfy Cafe on July 31st and caused a ruckus scaring the employees and visitors.

Eden is a human who has control over soundwaves in Arcadum's Forbidden Knowledge RP group. She was retired after the end of said RP.

Cleo is a small half-dog blonde child who was originally the adoptive daughter of Sky before Seth took over as a Single Dad. She usually is seen at Purple Lotus where she tags along with her father, sometimes causing trouble.

Irinarya is a High Elf from Aldoria who attends the Ascension Academy as a student. She appears a bit absent minded, speaks very quickly and tends to jumble her words together.

X is an invaluable Identity Broker & Forgerer who knows how to turn peoples life around by giving them a second chance, free of debt, or less indebted by picking up the name of someone dead.

She is Nanoades character when participating in Callous Row RP.

Nano spends much of her time with the likes of Kromia, Radiant_Soul, Ladle, Odomfire, and Lolathon, making jokes and yelling at people. Nano seems to be especially into poop jokes, even going so far as to visit an entire poop world. Whenever she gets angry, she'll do a silent scream and attack the aggressor with a baseball bat.

Pokelawls posing as Nano's actual father. Roflgator was behind the idea. 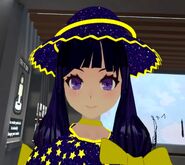 'The Monster' visiting The Comfy Cafe

'The Monster' is hungry! 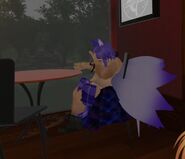 Tess calms down 'The Monster'
Add a photo to this gallery
Retrieved from "https://vrchat-legends.fandom.com/wiki/Nanoade?oldid=103950"
Community content is available under CC-BY-SA unless otherwise noted.