The Spark of the Community

Face of the Community

The Sea of Dem Boyz

This 'guy' is one of the most popular YouTubers in the community of VRChat who 'exploded' into popularity with his virtual reality videos. He also streams a variety of games on Twitch.

Nagzz has a new streaming schedule, beginning from Oct 22, 2018 will now be streaming 5-days-a-week on Twitch (the five days are not guaranteed as there may be a day where he takes a break to work on videos)

The videos that skyrocketed him to viral sensation mainly consisted of episodic adventures in VRChat with a cast of quirky characters with the likes of Rad (the O.G. and wife), Ryan (partner-in-crime), MaTSix (long-time nemesis, married for Rad) and Lanfear, in these adventures hilarity ensues...

But these episodic adventures have officially come to an end in Season 6. But the adventures don't end there, they are going to be done in a new way... Live on Twitch!

On March 2, 2018, Nagzz live-streamed for 24 hours for Breast Cancer Awareness; successfully raising over an astonishing $35,000 with the proceeds donated to the charity of Susan G. Komen. During the live stream he played over a variety of games such as "Golf It" and "Table Top Simulator", he also "proposed" to MaTSix which also inadvertently made Rad upset resulting in him having to marry her too.

On March 17, 2018, he was featured in a Business Insider interview along with Markiplier and Lindsay Jones of Rooster Teeth.

Prior to becoming Joey Bagels, Nagzz first met Rad and KimplE on the grass field world where she pointed a gun in his face, next to them was Kimple inside a box labeled 'Free Kittybots'. At some point during their meeting, he held Kimple (in a tiny form) to which he was amazed that such a thing like that was possible.

The Wedding of Joey Bagels, Rad, and MaTSix

As of April 15, 2018, Joey is now married to Rad and MaTSix, those who attended the wedding include Ryan, Jakkuba, and Ashunera. Kimple was also among the others present at the wedding also.

Here are some adventures that have happened... (in Season 4)

In the court case episode (with ShadowSnipe presiding as the judge), a tense legal battle of statements and reports plays out, will Joey and Lanfear be able to adopt Andis? Check out the episode to find out...

Joey along with Lanfear, Andis and Zero Guilt explore a house of horrors. What kind of horror awaits them in there? Find out in the episode...

The investigation of Lanfear and Oathmeal's possible sisterhood...

Recently, on April 20, 2018, Lanfear confirmed with him in witness, that she and Oathmeal are indeed siblings, confirming the suspicions he had. This eventually made it into an episode.

This article is but an abridged history of Nagzz and it is a work-in-progress, please to refer to the VRChat Adventures Episode Guide (WIP) which follows the story-line.

Adventures that happened in the new Cycle

Popping a question and memories of the past?

In his most recent outing, to celebrate Ryan and Jakkuba's honeymoon, while visiting a authentic Japanese styled sushi bar, (With a New Zealander waiter.), Joey hinted that he remembered the place, but Lanfear had no clue.. (The place was in actuality, the same roof top he caught Lanfear and Chipz in the previous cycle alongside Zentreya.) To save himself from this, he started to ransack the bar.

While celebrating his brother's honeymoon, Joey cornered Lanfear in the Dining Hall of the Hanabi River, on a boat, expressing how she makes him feel and how every day, he looks forward to seeing her and all the smiles she gives him. He appeared to want to ask Lanfear a very important question...

The end of an era and a retrospect of the past...

For the first time ever, Joey Bagels traveled through time and space into the real world for the first time. Read all about here! You can also watch the video of the broadcasted episode through this link.

The construction of his new nightclub "Bagel Bites"

After the success of the Neko Nights Nightclub, Joey expressed a long time ago that he would be build his own establishment to rival the Neko sisters', however he decided to dedicate the nightclub to his closest friends and family for the establishment as the future main hangout of choice, after some time discussing and deliberating with colleagues and his son Egg, he has finally made motions to see the nightclub be built. With some financing of his own and with some assistance from his 'close contacts'. He has hired the master builder Foxe to oversee the creation of the club...

The tale of two crews that became one...

On May 16, 2018. Nagzz with his motley crew; the Sea of Dem Boyz. Journeyed throughout the vast oceans hunting ships in an attempt to beat a previous record set in the last stream, as soon as they left dock they were ensnared by a Kraken but managed to fend it off successfully. With Nagzz going overboard (of course he does - lol). He then proceeds to "accidentally" kill the resident chicken "President Bartholomew" much to the chagrin of the crewmates... (clip that guys)

Later on, they encountered an illustrious galleon adorned in red and black. They faced off each other multiple times, one being able to sink them. But eventually, it was discovered that a stowaway was on board (Complexity) and after a shaky meeting between the two crews, they formed an alliance of eight men and two ships fighting alongside one another in what we lore writers can say that is probably the greatest stream we've ever seen!

On July 31, 2018. Nagzz begins a new journey in Dark Souls III as Godzz21, and with some advisement prior to playing the game from the V.S.L. (Virtual Support League). He finds out in the most tilting and most painful way and through dying so many times to the point of almost breaking 'Keyboard-chan' that he realizes that he needed a controller to make things easier. During his many encounters of mini-boss enemies he nicknames them "Puppers". On his second playthrough, he managed to fare much better ever since he got a new controller but still dies to enemies anyway. He vows to finish the game to the Twitch Fathers and says that the V.S.L. will also be there to assist when needed. (UPDATE: This journey will never be completed due to probably never-ending tilt and has gone the way of WoW Tuesdays and Sea of Dem Boyz Wednesdays)

On Oct 19, 2018. Nagzz deploys into the multiplayer world of Call of Duty after claiming to be "really good at it" back in the console days. With the Twitch Fathers keeping score of his K/D, he played several matches with varying degrees of success. Much to his tilt, he performed fairly well in his first foray back into the shooter.

In his second foray on stream, Nagzz teams up with TheManChildShow - Vintendo as they take on the futuristic world of Black Ops.

Nagzz has considered the possibilities to continue his adventure series, just not on YouTube. He streamed in VRChat, in VR, for the first time on Tuesday October 16th, visiting the Neko Nights map that Foxe had created and felt like it re-energerized his love for the adventures.

On Thursday, October 18th, he even ventured into public instances of the many worlds in the Metaverse and met many people and in it we were treated to a surprise appearance of the O.G. ArrangingStars (10) who was also accompanied by none other than Lynxlayer.

Below are links to lore pages which chronicle some escapades in Joey's continued journey throughout the Metaverse:

Nagzz has an extended family branching out into many other members of the VRChat community.

A family tree has been created to break down the many family members, although attempts at solving the many familial lines may prove to be difficult and will make people's heads hurt.

At this point, the family tree will be so huge that it may look like a scribbled maze...

It was confirmed by Ozzy, that Joey and Ryan are indeed blood-related brothers, a DNA test was performed.

At the time prior to the Cycle reset. There were new members added to the family of Mr. Bagels, with Rad's biological child RibbonHeart and Summit. It's been made apparent that Summit is the cloned offspring of Joey, MaTSix, and Lanfear (Ozzy must've snuck a sample). She shares the Neko-like features of Lanfear and has an oddly close resemblance to MaTSix.

While not having any supernatural abilities in any form, and just an ordinary human, Joey has gained some powers during the events of the Crossover. (In which he's not just limited to his tommy gun).

Due to becoming Lanfear and Oathmeal's guardian, he retains information and knowledge of the events that occurred in the previous Cycle, including his feelings towards Zentreya, and other complicated things. It's possibly also the reason he's harder to kill now, as he inherited Guardian status from Chipz, who was given it by KimplE.

The major example is Joey taking a grenade the size of a small dog to the face and not dying.

However these powers have faded in the newest Cycles and therefore Joey's supernatural powers was in-fact gone and his mortality restored when he purportedly died falling off down a mountain landscape where he and Rad had their honeymoon, only to be resurrected by an unknown deity that issued him an ultimatum.

Joey has used some sort of reality warping teleportation device that allows him passage from the VR world to Earth (in our reality). It was revealed in the first part of the VRChat Adventures Finale, it was a device created by Frankie in which was cobbled together from bits and pieces of scrap and disused parts. It took a miraculous amount of energy to power the device in which Frankie warned Joey that it's a only has a single-use, one for a trip to the real world and one to return from it. He also provided Joey with an mobile phone to keep track of the time (and look at the Twitch Fathers).

It's implied that the device can be used more than once and that Frankie may have white-lied to Joey about it to which he was furious when he found out. He expressed excitement in knowing that he can return to the real world to explore more of it...

Joey once more used the teleportation device however this time along with Lanfear and jumped to the real world once more, but unforeseen side effects separated him and the Neko and ended up landing at someone's house. He explored the suburbs of New York in search of Lanfear hoping to find her, along the way he met some strangers and stopped by a convenience store.

Other things to note...

Nagzz has his own private Patreon Discord community with his many supporters in which he considers his close friends and family, it is a place that holds many events and is a wonderful 'home' where the love is incredible and the community support and unity is real. He also has a public Discord server in the Nagzz Unofficial Raid Division a community born from his Twitch chat (The Fathers) it is also a welcoming place for others to join, chat and forge new friendships.

Fanart of Joey Bagels' harem of chicks (Made by Krinkles)

Nagzz on a news show being interviewed. See trivia to understand this meme 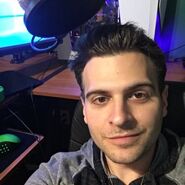 Old self portrait (and profile picture) of Nagzz.
Add a photo to this gallery

Retrieved from "https://vrchat-legends.fandom.com/wiki/Nagzz21?oldid=94011"
Community content is available under CC-BY-SA unless otherwise noted.