Not to be confused with: Mr. Harris

Harrison is a Guardian and Protector. His sole duty is to advise and protect his charge. Old but seasoned, Harrison is a martial genius trained in many forms of combat and has seen many a battlefield. With his immense strength, stamina, and agility he is a walking weapon.

Being a loyal servant to the Talaris corporation and his master Kei Noriaki, anything he says goes. Along with him he is currently stationed in Callous Row.

Lloyd R. Harrison was born into a royal servant family that serves nobility in the upper echelons of the Talaris Corporation. Trained to become a both servant and protector at an early age, Harrison served many noblemen and -women before becoming the head of his respective family. He now trains other butlers and maids while also looking after the young Master of the Talaris corp.

Harrison and his master Kei Noriaki.

Listening to a status report from General Cidd.

Listening to a status report from General Cidd. 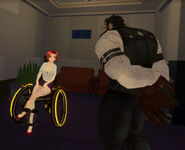 Handing over a crystal from Ikelos to Kei

Told to keep two eyes by Kei.
Add a photo to this gallery
Retrieved from "https://vrchat-legends.fandom.com/wiki/Mr._Harrison?oldid=101666"
Community content is available under CC-BY-SA unless otherwise noted.