Not to be confused with: Moxy

MoXiMoX is a full-body dancer and roleplayer in VRChat.

Moxi used to be in Chipz former "friends" group, which some called a Harem. They are still friends, though she has threatened to shoot him afterwards.

She is well known for being quite lewd and having a love for dancing, being apart of many different groups and participating in events.

Who is MoXiMoX - The Character?

Moxi was born into a life on the rode raised by her mother who was a gypsy. She was never afforded the luxury of a stable childhood as her people were constantly on the move for fear of persecution of their way of life. While the gypsies of her troop all had different skills from fortune reading to instrumental talent Moxi’s mother taught her the craft of dance. She took to this skill naturally having a natural talent that surpassed that of others her age. Her mother assured her that with a growing talent however there would be a growing danger as life on the road would not always be so care free. She was warned of the dangers she had been protected against whenever the troop visited a city. Warnings of those who would try capture her people for profit or their own entertainment, and those of the corrupted Dark Empire would rather slay them for their fortune tellers connections to the arcane. She was then taught to use her skills to get out of danger through bribery and seduction as well as always keeping an eye open for encroaching danger. Any situation she couldn't avoid she was able to slip away from with ease.

As she grew older she had gained much knowledge from her mother and her stories of the wandering people. One story that stuck out to her however was that of her father. Her mother never went into much detail quickly changing the subject if she was around but her inquiring mind was able to piece information together. She was able to find that her father had another family as well as she had a half-brother by the name of Don. She was never able to find out much else but always kept the name close in case she met him one day on her travels.

As she reached the age of 21 she was given a choice as all of the girls and boys who reached adulthood were in her camp, the freedom to leave and pursue one's own goals or to stay with her people. The urge to learn more about her brother and about what else this world has in store intrigued Moxi as she started her own journey!

Moxis main introduction was through Ikumi recruiting her for Roflgators roleplaying group around February 2018. Pretty soon after her recruitment she met Chipz who was on the rebound after his recent divorce from Nuts. She was swooned by his talented singing of Creep and joined his “friend group”. She was very upfront about wanting to get with Chipz and while she was very lewd towards him she showed a very caring and compassionate side even offering to help find Nanoades (Chipz adopted daughter) birth parents.

Moxi had her first solo date with Chipz on March 22nd. The two shared many intimate moments and kisses as well as a serenade by Chipz.

Eventually Chipz decided to settle down and choose another girl to stick with. Instead of continuing his harem he decided to commit to Ayytrox. He still maintained his friendship with the girls including Moxi but she was not convinced that he’d be satisfied with his choice.

The week following the end of the harem Moxi would continue to make passes at the Chipz even demonstrating her new leg mobility for him stating she was still available if the vampire changed his mind. One night when Chipz was drugged in The Great Pug she offered to let Chipz feed off of her to gain some strength however Ayytrox immediately shot down the idea wary of Moxi still having feelings for him.

At some point Moxi is offered an “investment” into Smorz and R3dzDead’s “taco and burrito truck”. She was uncertain of the offer and stated to Chipz that she’d only feel comfortable doing such a thing if Chipz was with her to which he declined stating he was not into it.

Tensions grew higher as one day in The Cupboard where Moxi confessed to Ayytrox: “I still want to f**k your man.” This would cause an argument between Chipz and Ayytrox and her not trusting that Chipz would stay loyal.

Moxi was later threatened by Libid, the daughter of Chipz and Ayytrox. Libid held a gun to Moxi’s head and told her to stay away from her father. With her life being threatened Moxi realizes that if she pursued the relationship further she’d potentially be breaking apart a family along with causing her own premature death. Not wanting to cause trouble she stopped pursuing Chipz and moved on.

After her separation from Chipz, Moxi decided to spend her time searching for new partners to be with as well as hanging out with her best friend Lumi who had recently become a Lycan after dating and being bitten by Zurui. At this point due to her love for dancing in her leg trackers she is recruited to the Dirty Dancers leading her own subsection named The Dirty Divas.

The Zurui and Lumi Wedding

On May 6th Moxi attended her friends wedding as a maid of honor, being good friends with both Lumi and Zurui. It is here that she meets Zenekon, Zurui’s brother and gains an interest in him.

Moxi soon got to know Zenekon and they started dating. They were a bit wary at first as Lumi and Zurui had warned them about the implications of Zenekon accidentally biting and turning Moxi into a half Lycan. During the course of their dating activities Moxi now had to balance her new boyfriends temper against the owner of The Great Pug as Rob had shown a dislike for Zenekon along with his prejudice towards “furries” which he assumed Lycans were a part of.

Roflgator began using Moxi for various missions in an attempt to weed out spies who might be working for the mafia. One such mission involved having Moxi flirt with Prophet^ to see if he knew anything, he did not. While hanging out at The Great Pug on May 18th Roflgator asked Moxi to assist him in serving and charming Don Vinchenzo Calzone, the leader of the local mafia and landowner of The Great Pug. While serving him drinks Moxi is given one herself and drinks it. Prophet^ warns Moxi too late and she realizes that she has been poisoned (secretly by Shrimp). She runs to the bathroom in an attempt to puke out the substance then promptly leaves with Zenekon, Lumi, and Zurui now all fearing for their lives.

'Uncertainty hangs in the air for the next few days as the A.I. Oblivious researches an antidote for Moxi. Moxi is offered to be bitten by Zenekon hoping that she will become immune to the poison through the transformation. She rejects the offer for now waiting for Oblivious to let them know what she has found. The pair head to the Strangers Cathedral on May 22nd to find a muted and dying Oblivious. The A.I. is only able to communicate through Moxi’s phone (her Twitch chat) and states that she found the cure. She hands Zen a vial filled with a blue liquid which is then given to Moxi to drink. As Moxi observes the vial Oblivious explodes in front of both their eyes into hard light cubes. Oblivious sends another message through Moxis phone stating that she is alright and needs time to regenerate into a new form. She drinks the antidote confused if it was the key to Oblivious’s revival or the cure she needed.

Later that night Moxi is bitten and turned into a Half-Lycan by Zenekon after they confess their love for one another.

On June 21st Moxi is proposed to by Zenekon and she accepts. She has decided to wait until she becomes a full Lycan to marry Zen and asks Oblivious to search for a way to do this without dark magic per Lumi’s transformation by Arcadum. The marriage however does not come to fruition as the pair separate in mid November but still stay close friends.

On the night of September 17th Oblivious contacts Moxi and Zenekon in an open field and informs them that she has figured out a process to fully change Moxi into a Lycan. Oblivious transports the pair to the Strangers Cathedral’s lab where the change will take place. Oblivious uses her rune of flesh weaving, gifted to her by Arcadum to change Moxis human DNA into Lycan DNA. With the process completed Oblivious has Moxi enter a chamber that will accelerate the process. Moxi enters the chamber for a couple of minutes and reemerges a full Lycan her once black hair, tail, and ears now a glowing white with purple highlights. Oblivious and Zen notice that she has a certain glow to her now as well as glowing constructs appearing on her body. Doing a scan of her body Oblivious discovers that some of her own essence had fused with Moxi’s DNA giving her control of hard-light energy and making her a hard-light lycan. Due to this accident Oblivious informs Moxi that she can summon hard-light constructs and might also be infertile as a side effect. With the transformation completed Moxi and Zen leave to give the news to the rest of their family.

On November 13th Moxi joins the Demon Dogs. She joins Sora_Ichi in a town to get acquainted with her new team members even though she cant see all of them. After introductions take Place Sora leaves on other business and Gilgamesh helps get Moxi used to combat having her join a spar between some of the Demon Dogs members.

Moxi has a very outgoing and bubbly personality. She’s most well known for saying whatever lewd jokes comes to mind. She is very caring towards others offering her friends help if they ever need it. She rarely shows anger only seen in one instance where she was denied a threeway and complained the rest of the night.

Moxi adopted Oturan around the time when the harem was ended. She rarely sees her adopted son/daughter but does check up on them to remind them to use protection because she's not ready to be a grandmother yet.

There are rumors that she is actually the sister of The Don which would make her the sister to Nephalem Kuri as well? 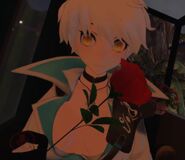 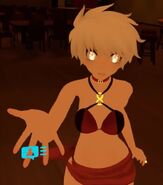 Moxi in her bikini avatar by Shonzo 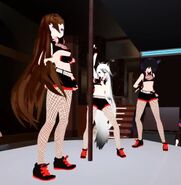 Moxi and The Dirty Divas, Zurui and LenaLoo at the Lair of Roflgator

Moxi wearing her outfit (avatar) that Miss Minerva DH made for her. 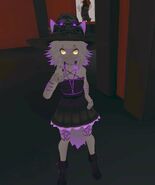 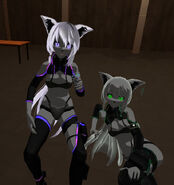 Moxi and Hulac visiting The Royal Gator together.
Community content is available under CC-BY-SA unless otherwise noted.
Advertisement