Morpheus or Morph for short is a roleplayer who's character is most known to work as a bartender. He currently works at The Purple Lotus but used to previously work at The Golden Gator in Bricktown as a pianist and even substitute dancer.

He's known to be a loyal worker who puts in extra hours and works extra shifts even extending above his usual employment tasks. When needed he won't hesitate to take off his shirt and dance on the stage or play the piano to provide musical entertainment.

After he broke his arm Kasumi used her powers to heal him by giving him some of her demonic blood. He was restored but appears to suffer from the side effects of now slowly turning into a demon himself.

On Jan 9th, 2019 he was promoted to Bartender by Roflgator when at the same time Mute Max was demoted to Janitor, appearing to replace him. Shortly after this his previous co-worker Mute Max resigned his position and started working at the competing store 8est.

On Jan 27th, 2019 he was tasked with making a mess at the competing 8est store by Roflgator but was punished and punched for not performing in a satisfactory enough manner. Roflgator took out his aggression by having himself, Kasumi and Mr Killshow hit him. Although taking a beating he carried on with his remaining work dutifully. The same day he had some embarrassing interactions with a girl named Wink Wonk, dropping everything he attempted to pickup. His butterfingers and expression of kneeling to her was at first misinterpreted as a proposal to her in marriage - although being a misunderstanding she rejected his advances.

He introduced his recent date Darling to his employer Roflgator on Feb 3rd, 2019. This lead to him getting involved in a love triangle drama when Mr Killshow hit on her. In reality Killshow had been sent to hit on his date by Roflgator to test her loyalty.

The event resulted in chaos where Darling ended up stabbing herself and him and Killshow left with the dilemma of what do do with her body. With suggestion from Roflgator giving her a "viking funeral" they carried her body to the Bricktown sewers. When they were about to light her on fire she awoke again - seemingly having her health restored due to her magical powers.

He fought in the battle arena against his co-worker Spellboy on Feb 17th, 2019 and ended up winning. This was after Spellboy had accused him for hitting his girlfriend OlyPearlGirl. As a reward for winning he got a promotion and was essentially free to boss Spellboy around for a week.

Unfortunately he got his promotion cancelled when he was caught skipping work on Feb 19th. Roflgator caught him ERP:ing with PipPip in an alleyway instead of bar-tending. He would sadly announce their breakup on Mar 10th.

During the summer of 2019 he would seek new business ventures. He resigned by not showing up at The Golden Gator due to a consistent lack of pay which his employer Roflgator blamed on the mail service not delivering paychecks properly. Instead he started working at a high class casino, namely The Purple Lotus.

Vulcan is a vampire in Ascension RP.

Ikelos is a Twili Imp who lives within the undergrounds of Callous Row. He is the first Twili of his kind to fuse a “Sol” to his body. They are trying to escape the clutches of the corporations while simultaneously searching for a way to return home.

Liang Gray Raven is a student who transferred to the Ascension Academy in the second year of the academy. 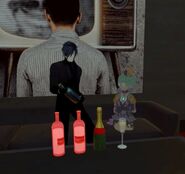 On a date with PipPip.

A meeting with Roflgator as Mute Max gets demoted and himself promoted.

Morph at The Golden Gator. 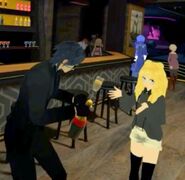 Being silly dropping things when interacting with Wink Wonk.

Playing the piano with Meech watching.

Dancing on Stage with Darling.

Morph, slowly turning into a demon after being healed by Kasumi. 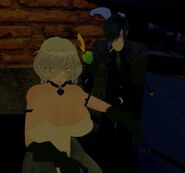 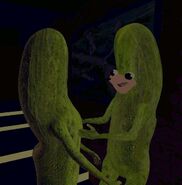 Portraying a one of Vores children. The strange pickle has spawned many strange offspring.

Portraying a furry character as a challenge issued by Roflgator after loosing a game of "Quirks". 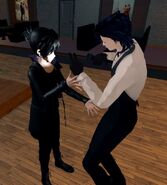 Investigating whats wrong with a patron. 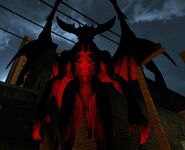 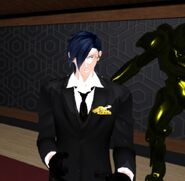 Visiting the Neko Nights Club, talking to Chipz.
Add a photo to this gallery
Retrieved from "https://vrchat-legends.fandom.com/wiki/Morpheus?oldid=96763"
Community content is available under CC-BY-SA unless otherwise noted.