Monty grew up with her mother and father, and siblings, 2 brothers, She was born with a leg issue that crippled her for most of her life, But after saving up enough money after college she augmented herself to give herself the ability to walk again. She continued to augment later down the line with the extra arms, She found them very efficient for work and most minor things in life. After applying for Shometsu she has continued to work on augmentation of the mind through chips making people more efficient .

Monty had a friend during her college years, They were both really close but once they graduated her friend lost it or something snapped, They had fought and it resulted in her friend dropping down some stairs, and Monty gaining a scar and a feeling of failure to be there for her friend. 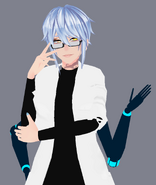