Misty Flame was created by the Melder of the fourth layer. she was sent out on a mission with her pack outside the layer and found her pack leader to have died in battle, She decides to enlist and join Ascension Academy in hopes to improve herself better than her fellows so that she may be chosen to be the new pack leader one day.

Misty had entered Ascension Academy with many other students but came in late due to the bus being late. She came in very heavy-hearted about everyone that helped the medical bay as she did not believe in healing as it was a sign of weakness and defeat for herself and believed that every one that is weak should be left behind as the strongest Survive and the weakest fall. However, when taking around the academy she found out that others had the same mindset the first day they arrived.

Misty was gathered by the rest of her Squad to have a meeting about forming a squad leader and found that the squad "trust" was found to be a big problem throughout the whole squads around, they wanted to see if picking a squad leader would help solve the problem and would make things more workable but misty was not having any of it. Due to her goal of becoming a pack leader, she did not want to follow any orders by someone that she felt unworthy to be and had a very big dislike towards many of the members.

However, when in the meeting a problem had made the trust of Joseph for misty very hard and the fire burned with anger once she found out that one of her friends Naitya was getting punished for inflicting punishment on Joseph for "Shaking A Devils Hand" and told Joseph if he was to be the leader she would not follow. Joseph then flipped the saying around and made misty to think she was being disrespectful to her kin and misty was about to kill him in the room right there and then but Narali stopped her and Aida talked to her about "this was a lack of military discipline" and pointed to the door her eyes raw with anger as she left the room and found that Aida was giving her orders like a dog but sometimes past and she found herself to come back and apologise right after even though she still would not be ordered around.

Misty was able to control her hellfire very well and decided to train more in her own time to control the temperature of it and find out if she was able to do more then just blow fire and catch herself alight.

One day, Shizuko was amazed at Misty's fire and misty found out she was having some problems controlling her temperature and controlling the wild spirit fire she used in battle and saw that Shizuko was troubled as she felt unworthy of herself that she was not able to control it fully, misty felt strongly connected to Shizuko culture and wanted to help out any way she could so Shizuko could feel worthy of herself and slowly started to gather all the fire magic users to have one of one lesson with each other so they could train as one of the members Vevina was highly scared of fire and would cause discomfort for all the fire users in the group as even Melanie was very limited on her fire last year because of it.

Misty and the fire users Shizuko, Melanie and Ryder started to do some fire lessons together and in doing so Shizuko spirts fire grow stronger and formed on most of her body and made misty believe that she could teach more to others to help them grow stronger themselves.

Demon-Kin shows the true bond between demons together and how well they work together to solve problems. The Power that forms from Demon-kin has the bond of a thousand soldiers heading to war, As Misty and Ryder start to the bond with each other as well as Miss Bliss. Many of the students that are not demons will not understand how loyal the Demon-Kin bond truly is and many say that if breaking such demon-kin bond could lead to other dark paths. As Well as "Demonkin are those who identify as a demon or demon-like being." 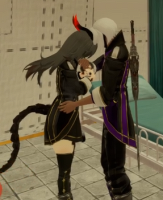 Misty in her casual wear.

Misty at the volcano

Misty checking a chest in the Crypt

Misty and Rex after the events of Bump in the Night

Misty, Speca and Vevina on the Timmy summoning

Misty and Narali in class 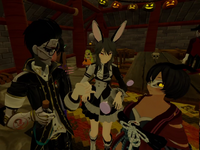