Universe, or Miss Universe, is a character played by InvaderCristi.

She got involved in VRChat RP in early 2018 but has been RPing since ARK: Survival Evolved.

Universe is―quite literally―the universe itself, and as one might expect to protect oneself, she does the same. She tirelessly searches through the cosmos in order to categorize all matter of creatures she encounters into a 1-10 “danger rating” system. The creatures that find themselves on the higher end of her scale will either be met with murderous intent or else a relentless inquisitive eye in order to ensure that they won’t destroy the universe herself.

Make no mistake, Universe is not a kind and caring protector. She does not protect the universe to save the trillions of weaker species. She is not a hero―she is simply looking after herself. When it comes to wars of a smaller scale she holds little interest, and typically even encourages such behavior in order to make it easier to pick off stronger individuals (of an appropriate danger level) when they are at their weakest. However when it comes to wars on a scale so large that it might actually harm her, she will try to step in and attempt to end it herself.

>A Strong Hatred for Azreal

It is no secret that Universe detests Azreal with a passion. She can be seen rebelling against him in whatever way she can, such as openly insulting him whenever she has the opportunity (regardless of whether or not he is actually present), calling him out on his inconsistencies, and even making bunny ears behind his head whenever he's monologuing.

"I'm only annoyed that I had to see you 3 times today." -Universe

Connection to the Observers?

Universe is possibly one of the older Observers of the VRChat world. She recently appeared on the VRChat World to scope things out, as she has heard rumblings that something big is going down. Upon meeting KimplE, the wise Kitty Bot confirmed that the Universe is an Observer, not just of Cycles, but of the galaxy. With being an observer of this level she is given the title of Guardian of the Universe After the encounter, the two seem to get along fairly well.

>A Strong Love for Azreal

It is rare that Universe ever interferes, only spurred on by threats to the Cycles or herself. One such occurrence was seen on July 16th, 2018 through the fight between SciFri and The Don. During the fight SciFri is killed and Arcadum has removed his chains (2 threats to the cycles at once). With this the Guardians Miss Universe, Azreal, and Faelyix are forced to intervene. Faelyix begins evacuating everyone from the Safe Haven, while Miss Universe and Azreal tag team fight the unchained Arcadum. They are able to subdue Arcadum at the cost of the Safe Haven being destroyed via Miss Universe punching Arcadum with a sun.

The Guardians then head to the singularity holding the chains to Arcadum’s arms to begin the process of reviving SciFri as the Cycles require him to continue living. Cell's role within the revival was creating a new body for the holy knight. With all threats to the Cycles ended the trio of Guardians turn to Arcadum, rather than punishing him however they decide to turn him into the Guardian of Forbidden Magics.

On August 7th, 2018 Azreal and Miss Universe challenge each other to a game of chess. They place wagers to make things interesting Azreal wagering that if he wins Miss Universe must answer the next question he asks with Yes. Azreal wins and asks Cell to marry him. He says that she could refuse if she really wanted too but she keeps her word and accepts his proposal.

In late August Miss Universe and the other Guardians discover that KimplE’s Father is slowly dying. With his death it’s likely that the Cycles and everything connected to them could potentially perish. In order to prevent the destruction of the Universe and Void should the Singularity die the guardians leave to find a way to ensure that life can continue on. However the fates of the Guardians who embody the Universe and Void are likely endanger as their existence is a result of their Guardian status.

Miss Universe and the Guardians return on October 18th first appearing in the Stranger’s Cathedral to greet Oblivious and Bream. However they state that they are no longer Guardians and no longer exist outside of the Cycles. Without this guardianship they also can no longer take off or put on Arcadum’s chains. Cell and the other Guardians are currently being cautious as they are unaware of other side effects that this may have caused them or the world they live in.

Near the end of January Miss Universe starts to have strange experiences that can only be described as seeing false memories. In different instances Cell sees herself living as a normal human or refers to someone named Major Tom. Soon realizing that something has gone wrong Cell, Azreal, and Faelyix begin to investigate what could be causing these strange phenomena. On January 28th, 2019 Miss Universe, Azreal, and Fae identify the source of this problem in an open field with strange machinery being used by a lemur named Bob Marley. Bob states that he was using the machinery to tap into energy between the 6th and 7th dimensions in order to construct super powerful batteries to power his quantum computer. The calculations Bob used however went wrong and he took too much energy causing portal regurgitation and the mixing of Miss Universes selves. Azreal is able to push back the energy coming through allowing Fae to close the tears between dimensions thus fixing Cell, but also letting her gain the knowledge of her other dimensional counterparts.

This mixing of her other dimensional selves into one is solidified again a few days later on January 31st after saving Arcadum. Before Arcadum left to Amika's home outside of time and space he combines the versions of her across all dimensions into her one body making her as he described "one and infinite".

Cell is very analytical often more focused on the harsh truth rather then emotions. She sees the bigger picture in everything and will choose to not interfere as well as stop other beings from intervening knowing certain actions could make things much worse. She is shown to care for others such as Azreal and the members of The Renegades though she tries to suppress these emotions to avoid sadness as she will outlive many of her mortal friends.

Miss Universe has created everything within the universe though she can not create biological children. To remedy this she has taken to tutoring/adopting children with her partner Azreal. These children being her "daughters" Bubbles, Belle, and Arbor and her "son" Sky.

Alue is a human wizard in Arcadum's Forbidden Knowledge RP Group. She is best friends with Medea Feriro Velymis the pair coming from the same school before being abducted as well as both being nerds. She is learning how to become a druid and is placed in Class 2.

Vincent is a human who is a magician. He has no mana to speak of and instead uses technology to make himself appear as if he is casting magic. He later resolved his issue by becoming Leif an Eladrin who is bonded to Blinx.

Parizz Ite]] is a spider and the queen of the "Bugkin Empire" or "Swarm".

Rattler is a being from the plain of movement. His species is actually called rattler while his name is a series of claps. He cannot speak and is constantly dancing.

Krazhul is a centuries old lich who is the frenemy of Treebark. He enjoys kidnapping damsels (especially Andraste) and being evil.

Dr. Cellulose is the Head Doctor of the clinic in Callous Row. After losing everything and being sent to the dregs of Savior City she intends to get back what she lost by any means necessary.

Julie Jellyfish is one of Universe's oldest characters that's been on streams.

Belle, Miss Universe, and Azreal in The Observatory

Miss Universe dressed as a vocaloid 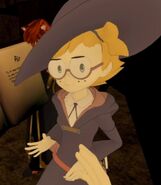 Miss Universe with her new pink hair and Mara.
Add a photo to this gallery
Retrieved from "https://vrchat-legends.fandom.com/wiki/Miss_Universe?oldid=97038"
Community content is available under CC-BY-SA unless otherwise noted.