Who is Miss Minderva DH?

Miss Minerva DH is a Twitch streamer who roleplays in VRChat. She has played multiple supporting roles in various RPs. You may know her by her most popular nickname "MOMager".

She first started role-playing in lobbies hosted by LeyLey & Roflgator in early 2018. Her most well-known role was that of the RP "MOMager" of Club Rogue for the Chipz Night Club RP collective during the Crossover_Chronicle with Joey Bagels in the Season 4 RP that took place in the summer of 2018.

Born to a Celtic Father & British Mother, she was raised in a small village then brought to the big city by her mother when her father passed away. Her present age is 431 [Died At Age 30]. At her death she was transformed into a Banshee to represent and guide her clan to the afterlife. As her clan is small and most have passed on she was allowed to return to he mortal plain to continue her studies in medicine. She started out as a midwife in her local village, through education she moved on to pediatrics, then became a general surgeon, eventually moving on to pharmaceutical's & investing. Having made her money through her work life and investing she has moved on to volunteering at free walk in clinics and providing her services to areas in need. She is capable of both standard physical medical as well as using her air and water magic to heal the injured magically. She is currently working on learning more about mechanics for assisting cyborgs, robots, amputees, etc.

Madame Minerva is the Admin Assistance to Ascension Academy. She handles all of the accounting, paperwork, and communication between the Cross Allied Forces, Established Political Powers, and The Academy. She is also approved to take on any role within the Academy if the Headmaster & Professors deem it necessary and assign it to her.   [More Info Soon].

Madame Minerva will visit The Purple Lotus (PL) once or twice a year, which is owned and run by a friend of hers, Satchi. She uses her night at Purple Lotus to unwind and relax. She also has ties to Oblivious who is in charge of her own organization, Aegis, and checks in once every couple of years. After establishing Eclipse Enterprise on the moon she moved on to be a silent owner and currently focuses on expanding her library and scouting out assistance from those well educated librarians and storytellers of all races. Madame is available to those who need assistance or guidance though her own experience or through acquiring information in her library or connecting adventures to others in their field.

Dance Party with Lanfear, Andis and The Bagels Crew

Minerva behind the scenes

Minerva's new avatar after getting hands

Minerva and Izzy hanging out, out of RP 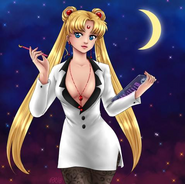 Fanart of Miss Minerva done by PR18, @Rally_TheArt on twitter