Purple
Mhai is a possession-type demon that was freed from her Curse. In her freeing, she struck a deal with her final Owner: With her unusual Demonic power, she will strive to help others, she will heal those who ask, she will speak the truth, and she will never again seek to injure.

For the price her Master paid, for the words he left her, she embraced his creed as her own. And now, she seeks to understand his final words and learn: What is it to love?

Mhai is a current Manager of the Purple Lotus Lounge where she works the Thursday, Friday and Saturday VIP nights.

Banished from her world, Mhai was discovered by a wanderer. In her despair she reached out and met one of great kindness who embraced her in her pain and sought to heal her.

To help with her recovery, the wanderer placed her amongst friends at a local lounge called the Purple Lotus. It was hoped that through interactions with others she could heal and discover exactly who it was she was destined to be. As she recovered and learned how to live with humans, she joined the staff and was promoted to head Manager. Mhai manages and hosts VIP nights at The Purple Lotus.

She searches for the other half of her soul which is contained in a black blade with a red edge. The weapon is her Cursed Gear and maintains the majority of her demonic power. After the discovery of her sword, Mhai, Seth, lolChow and Noru faced down a rival mafia group and recovered Mhai's weapon. With her demonic soul restored, Mhai was once more able to enter others' minds and dreams. She began assisting fellow Aegis members, traveling through the dreams of both Pumpkin Head and Sky.

After the death of Sethia, Mhai granted a boon to her brother Konton. In his despair, he asked to have his memories of Sethia wiped from his mind. Ignoring her warning of the damage this would do, Konton insisted and out of love and friendship, Mhai agreed. Her companions at Aegis were aghast at the decision and confronted the pair. With Konton unable to understand what he had done, they took their ire out upon Mhai. Now suspicious, her companions wonder about the demon they allowed into their hearts.

During a PURGE battle on June 15th, 2019[1], Mhai was struck by a bomb using an anti-magic material: Otataral - Due to this, she entered a coma as the anti-magic metal was absorbed by her red blood cells. Hybris began chelation treatment to remove the otataral with the hope that Mhai will recover.

Mhai views her place as in service to better the experience of others. She avoids combat and conflict and will always seek to help or heal those who are hurt. Given the age since her rebirth as a demon, Mhai is a mixture of child-like guileless wonder and mature emotional strength. Both of her masters were men focused upon self-improvement and offered little exposure to experiences outside of their core strengths. Due to this past, her understanding of the world lacks areas of knowledge that would be common for others.

Each demon is cursed with a unique ability that reflects a lost aspect of their humanity. During her rebirth, her Master decoded the full enigma of restrictions and capabilities that drive Unbinding. Mhai perceives and can sever bonds that exist in physical or ethereal plains; however, a Bond of greater value must be created to maintain the Law of Balance.

Screenshot of Mhai and Satchi in the Lotus 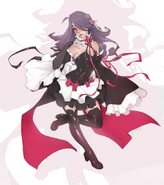 Seth carries Mhai home after an attack by ZeChibi