Mercury is TheEmoHealer's character in Neon Divide. In the third season of the RP he is the acting sheriff of Scrap Town.

Additionally to streaming his point-of-view he edits abridged episodes on his YouTube channel.

Mercury is a synthetic, doing his best to survive in the Wasteland outside of Salvation City.

He was originally built and designed as a Light Combat Model by the Shometsu Corporation. After a fleeing a robbery in the city, he traveled to Scrap Town for repairs and ended up being taken in by an elderly man named Zax Prowler. Since then he has continued to work in Scrap Town as a repair man focused in robotics under the old mans teachings.

During this episode we observe much of what Mercury's regular tasks consist of, and his attempts to help the locals of Scrap Town, while filling requests from Zax Prowler. Such tasks include addressing clients in the Robotics shop, sending messages to others on behalf of "Mr. Prowler", and his regular work in the shop of cleaning, taking inventory, and preparing the simpler orders.

This is interrupted when a "Big Crabby" a giant creature with Scorpion like traits, invades the nearby arena. Unarmed Mercury attempted to warn civilians away from the monster, however his warnings were almost completely ignored.

Towards the end of the day Mercury and Zax spend their time talking a horror genre BTL, that Mercury seems to be struggling to understand. They discuss the value of a friend, and the reality of having to choose between them.

Things begin to go against Mercury's daily business, as he tries to fill client orders and fulfill Zax's requests of him.

While assisting Anna, she and Mercury are stopped by Rico Suave and his gang. Rico proceeds to order Anna, to stand and walk towards him regardless of her injuries, and severed feet. Continuing to comment on her unclean and unhealthy state. Mercury while wishing to support Anna, takes no action to stop Rico, until Sheila Faires Dinkum breaks up the encounter.

While working in the shop, Zax Prowler and Mercury hear shouting and panic from the arena. Investigating they see a strange fire burning in the scrapyard, and seemingly chasing people. (Later discovered to be an enraged flame spirit.) Fleeing to the shop, Zax and Mercury are trapped as the fire melts the door, "advising" Zax to hide on the third floor, Mercury holds his ground on the second floor, until the spirit explodes, badly damaging the Synth.

The remainder of the episode for Mercury is comprised of several parties assisting in his repair.

It is a hectic morning in the shop, when Rico Suave's gang drags Paprika into the store after being shot. Zax Prowler and Mercury give what immediate repairs on Paprika that they can, soon learning that Sheila Faires Dinkum claims to own Paprika. Zax agrees to finish repairing the drone in exchange for a favor, as Shelia did not have credits to pay.

Walking around Town Mercury, and Zax come across Rana Amariah, a Avalon Corporation employee. The boys show Rana around town, and answer what questions they can for her. In exchange Rana gives Zax, and Mercury, 120,000 credits as thanks so they can have "Fun". Zax and Mercury agree that they will go shopping the following day.

Panic sets in when news of a large away team of Slummers from the Undercity, led by Ashley Jones, have not returned. With the sandstorm only 30 minutes away the town scrambles to find ways to contact them, as they can not risk sending a search party with such little time left before the aggressive nocturnal wildlife of the wasteland start hunting. The team returns with only minutes to spare.

Between Elementals, Sandworms, Bandits, and Alien invaders, Mercury proved himself to be trustworthy enough to become Scrap Town's new Sheriff. 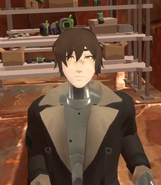 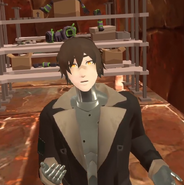 Aiding Toolbox in recovering Sten and Scootz, after they got their car wedged

Overlooking the oasis with Sten

Taking some practice swings, before his fight versus Becky Cantuckit in the thunderdome arena 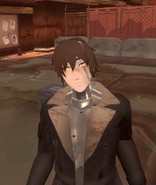 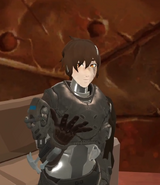