Maxwell, or Stein as they used to prefer, is an augmented human with an undead-like appearance. They possesses a cocky attitude, raised on Slasher and Action flicks of old. Despite their appearance, Maxwell claims that they once were a high rolling mercenary in a location they only refer to as "The Shit." They claim they were attacked by a group of "strange looking punks" before blacking out and they woke up in the body that they are in now. Knowing nothing of their location, they simply wish to find "the low sonofabitches that did this" and get answers. However, having no friends, family, or any affiliation to anyone would likely make this difficult.

Stein's first appearance in Scrap Town was an estimated two days before the start of Season 2. However their involvement did not begin in a major sense until Episode 2. Sometime after arriving, Stein was offered work from Ashley Jones and her crew of scrappers, who were looking for extra muscle to assist with combating the dangers of the Wastes. Since then, Stein has become deeply involved in their ordeals. After some time working with the aforementioned group, Stein's skills in combat caught the eye of Xion Eros. Which landed them a position in the town's local mercenary guild. From this point on, Stein was able to work to a position of being able to take on small time work that is mostly done alongside the Scrapper crew. It's important to note that nobody in Scrap Town knows of Stein's real name or their strange situation at the moment, likely to come into play in the future; Though their backstory has been referenced in passing dialogue.

Following the deaths of Ashley Jones and Pepper Alex Ly, Stein looked to pick up the pieces of the remaining Scrappers and install a joint leadership between Ryzy and Reeza Dunewind. Additionally as of recent Stein has looked into investigating his strange situation that has resulted in his appearance in the Wastes. Stein and Reeza Dunewind have been actively investigating a way to open the strange tear in reality in the Spirit Canyon, looking to use it as a means to narrow down Stein's search.

After a string of events that resulted in a lost eye and string of PTSD attacks, he soon found much of his past to in fact be a lie. Finding to be from the Lower City and Ex-Corporate at that. Hailing from a desk job in MARS Corporation which may have included a fair bit of dirty work on the side. Maxwell soon began to understand that he may have been a victim of a hit, resulting in a fatal car accident that nearly cost him his life. Maxwell was then put under for emergency surgery, resulting in his augmentations. While he is curious on his alter-ego, far more pressing matters are at hand.

After an unfortunate run-in with Thaddeus, Maxwell was gunned down by the man himself. Currently his corpse is left in the Spirit Canyon.

Maxwell’s augments were implanted in an attempt to reverse muscle and skeletal damage that occurred in their backstory. These augments are experimental, thus having the drawbacks listed in the flaws. 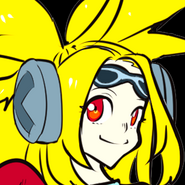 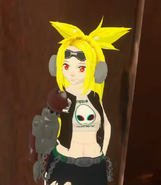 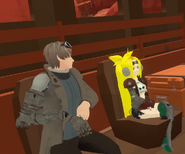 Walking in on the synths during the Titan (A.I.) situation 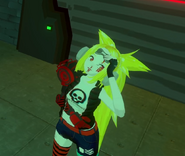