Not to be confused with: Max

Maxamillion Stillewell is a member of the Trident Corporation working as the manager for the pop superstar Mey. You can often catch him chumming it up with other corporations, trying to solidify media deals.

The majority of the time, Max is doing the bidding/will of his client Mey. He will move the world for her, ruthlessly if need be. Max has an almost over the top happy demeanor, opting to be grand and ostentatious in most interactions. He is a good friend to have and you don't want to think about being his enemy.

Max gets a phonecall from a pseudonym named "the brass king" that he has something that he wants to see. Visiting a computer with Miss Money the device turns on by itself and offers some valuable information in exchange for a dangerous demand. It warns of Shometsu moving against them, the secret of the GEB cubes in their labs seemingly turning people into zombies.

After offering this the hacker demands that they have until tomorrow night to get the leader of TraVerse - Ellek Myth - in front of the old cakeshop in The Row. Before answering any more questions the computer turns off without a trace except a user login - "Yamato".

After the failure and apparent scrapping of the Trident Persona Fix project, Terrance Reynolds, one of several CEOs of Trident and the only one with a vested interest in Hellion, became focused on making sure none of his employees were under the influence of outside entities. Suspecting Max was afflicted by some kind of magical curse, he brings in Masaru CEO Calliope Keres to examine him as corporate political favor. Calliope discovers Max was somehow bound by an unknown powerful entity, and when Reynolds asks her to break the bindings she realizes the individual on the other side is a djinn who is angered by their tampering of his contract.

After screaming about not wanting to remember and passing out, Max awakes from what he assumed had been a dream. He tells the group that he had made a deal with a starlet in exchange for forgetting his past and his identity. He says his real name was Christoff and he had lived in the Row. When shown a picture of Mey by Valerie Filly, he identifies her as the starlet, implying Mey is a djinn. He said he had wanted to "end it all" because his family had died with no leads, and so he had made the deal. He tells the group he feels he had been molded to be the perfect manager. Reynolds instructs Valerie to monitor him along with the guard Reginald for at least the rest of the day in case he turns out to be a security risk. Calliope informs him that he is also a mage.

Max (as he prefers to continue to go by) is dazzled by his new career in the Upper City working for Trident, as he was a talent manager before signing the contract as well. So as not to raise too much suspicion, Max attempts to keep up the same chipper attitude as he had before he had his contract broken. However, Torok the Gleeful, a frequent associate of Trident, only needs a moment before immediately recognizing something has changed about Max, despite his efforts to conceal it.

Max wakes up in the Undercity Sanctum in the care of Raleigh Seren, who had carried him there from the Wasteland the previous day. After conversing a bit, he collapses and she brings him to the Upper City to appraise Trident of his condition: he's dying, and it's very apparent from the visible corruption creeping over his body. The demon inside him takes control of his voice and begins berating those around him. Raleigh manages to stabilize him and they come to the conclusion they'll need to consult spirits in the Undercity if they want to have any chance of saving his life.

The two plus Trident guard Reginald travel through the Row to the Undercity and make their way to the Grove. In the Grove, the spirit tells Max they can do nothing for him, he needs the influence of the Shadow spirit, and that the removal of the demon controlling him could mean death if no one else takes the demon's place.

Raleigh leads him to the Shadow district where they make contact with the Shadow spirit, who Raleigh refers to as the "Shadow mom". The spirit tells him the same as the Grove spirit, that something must take the place of the demon tearing him apart inside in order for him to survive. After being told he must commit to whatever course he wants to take, Max decides to make a deal with the Shadow spirit to let them be the one to take control of his soul. The voices cease and the visible corruption on his skin begins to recede.

Max is grateful to Raleigh for her help in saving his life and asks if there's anything he can learn from her about shadow magic or magic in general, so she takes him to the Sanctum and gives him books to study, while also explaining how different aspects of magic work. She tells him he lacks confidence and he needs to build some to be able to control magic and take control of his life. 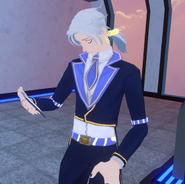 Max gets a message from "The Brass King"

Flounder and Max vlog in the Undercity