Black with purple streak
Marceline is a demi-human mechanic who works at Marcelines customs with her synth S.E.R.A..

At the moment she is trying to help others like aiding in being the leader of The Wyverns to escape from the Valkyrie corporation. Fearing any potential wrath she incurred after defecting.[1]

At a young age Marceline was a child robotics prodigy who had scholarships in robotics and technology, until one day she found S.E.R.A powered down in the back room of Finnie's garage and started to tinker on her. S.E.R.A. malfunctioned and tore her right arm off. Unable to get a prothesis, she lost her scholarships and was denied jobs due to her new handicap, and she eventually stopped tinkering.

Once she got a prosthesis, she began working on projects again and gained a fascination with tinkering and augmenting her prosthetic. Her father, Finnie Key, worked at Valkyrie and managed to land her a job with the corporation. Valkyrie had noticed that Shometsu is public enemy number one in the Row, and they wanted to make use of the Row’s recent resilience in the face of catastrophic events to find out more about their rival, as they generally don't get along with the other corporations already anyway. The corporation sent Marceline down to the Row as a representative to establish a foothold and gain the trust of its residents, with the end goal of gaining access to information about Shometsu’s activities, and possibly, through connections in the Row, gain access to some of their technologies. 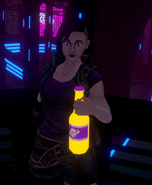