Luin Malice was once a proud member of The Hellbats, but he left after his squad was almost completely wiped out due to incompetence on his part. Rather than be reassigned, Luin left, his inner demons following close behind.

He ended up in the Wasteland on Corvanis 3 after hearing through his network of contacts he made while part of the Hellbats that there has been a lot of interest in the planet from several different parties.

He now uses his skills to work as a bounty hunter or a general gun for hire. He mainly spends his time protecting the transports that run through the Wasteland for regular income. To this day he still sticks to the code drilled into him by the Hellbats. As long as it suits him that is. 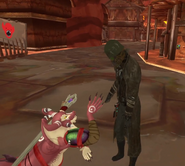 Sheila crawls up to Luin