Head of Firearm R&D at Valkyrie

Luca Gray is a young human born into a Valkyrie family with high expectations. In his early years he was sheltered from anything outside the Upper City. He always kept a level head, exceeded educational standards, and never questioned his family's moral compass. He was expected to follow in his father's footsteps.

Now, new to his position as Head of Research and Development of Firearms at Valkyrie (fast-tracked by his father's high status at the Corporation), he's finding out more about how things are done behind closed doors not only at Valkyrie, but at all Corporations, noticing their influence on the people of the Row, the Undercity, and beyond. 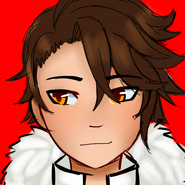 Renting a vehicle from Miss Ront in Scrap Town under the pseudonym of "Jonathan". Intending to go out on a caravan into the wasteland