The Army of Darkness

"I think of myself as a method actor. I will occasionally eat cat food to get into my role... Protip: the Fancy Feast Tuna flavor is trash, it's all about chicken." ― Lowrhen

Lowrhen is a Twitch streamer and TikToker on Team Kinetic and Team Hope. She is known to be extremely energetic, both on and off the dance floor. Singing is also a large part of her Twitch content as she is trying to become a real life Disney Princess. It has been shown that she is very easy to impress and entertain. She is also a big fan of cats.

Her most notable content was a series of TikTok videos created in late 2019, featuring a muscular Pikachu she dubbed "Stronkachu". The advent of the muscle-bound, protein drinking, perfect buff Pikachu boyfriend has gone viral on the platform. This has caused many VRchat streamers to begin using the service.

All of her announcements on her Twitter are proceeded by a custom made gif relating to the intended content. She makes a habit of attending public worlds on most, if not all, of her VRchat streams. At the same time, she always tries to do something different like being an Art Critic trained by Bob Ross to singing pop songs like a Death Metal song.

Off stream, while still exceedingly energetic, Lowrhen is known to hang out with friends and relax with her cat playing Skyrim. She is currently earning a Bachelor's degree in Computer Science. 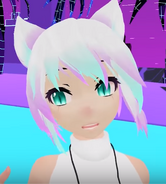 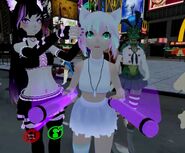 Lowrhen and Venerac performing on stage at The Golden Gator

Lowrhen dancing in her Halloween avatar.

Lowrhen during her Bob Ross stream

Akat and Ven being upstaged by Lowrhen

Lowrhen at the Twitchcon 2018 chalk board

Lowrhen and Venerac dancing at a Kinetic Christmas party
Community content is available under CC-BY-SA unless otherwise noted.
Advertisement