Church of the Traveler

Church of the Traveler Follower

Liza grew up in a very impoverished and struggling home located in District 22. She was acquainted to one meal a day and hand-me-downs from kind family and neighbors. Her grandparents died quickly due to illness and age, limiting her parent's availability to watch and care for her. For months the three of them struggled greatly, but it was not for long. Her parents soon came into money via testing mundane and highly suspicious cybernetics from Avalon and Valkyrie. They were able to spend more time at home, and often would hide the pain from her; the physical and mental. Holidays and birthdays became ones full of cheer, and Liza was gifted glasses, something her parents always wanted to give her. She was no longer struggling like she use to. They were happy, at least somewhat. Her parents would never share the stress of being under the corporate thumb, as for once in their simple lives they had reprieve. But as Liza grew and soon moved from her home, she left with a skewered view on what cybernetics can do for people. Especially those who are struggling.

Liza learned of The Church of the Traveler via the web. Reading threads of debates and testimonies of salvation through advancement. She had never had cybernetics herself, but she finally felt as though she found her calling. She had found her home. She took on more work, pulling multiple shifts at many jobs until she could afford to replace her eyes. Believing that the Traveler would grant her sights beyond imaginable, she opted for the surgery. Though the scarring lingered and set in unsettling ways, she had cybernetic eyes. And she could see far better than she ever could. No longer relying on her glasses, she thanked the Traveler for finally granting her true vision. She made it her goal then on, to bring many more to the fold of the Traveler. 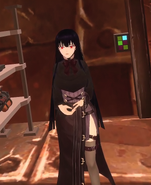 Visiting Scrap Town, offering charity from her church for the less fortunate.