Lila Fang is a lycan and sister to Zackary Fang. Both siblings attend Ascension Academy together. She was very shy and quiet often overshadowed or bullied by her brother but she stepped up and now she's became more confident in herself. She is played by Bandaid.

Lila was born as a full human and was turned into a lycan unlike her brother Zack. Unable to fully control her powers she was given a magical earring to prevent the beast within from going berserk. After her first transformation Lila was often plagued with nightmares. Lila and her brother come from a tribe of Lycans.

They transferred to Ascension Academy together along with Jixie (Stream date May 26th). She mostly followed her brother around often apologizing for her brothers aggressive behavior. While the siblings varied in personality they were still close and care for one another. After Squads were chosen and Lila was separated into Crystal Thorn from her brother who was placed in Vanguard she became worried about having to be independent.

After a training exercise where students were taught to sneak past a spriggan by Headmaster Kareeda Akyama Lila meets with her brother Zack and Jixie in the arena (Stream Date June 27th, 2019). Zack transforms into his full Lycan form and tells Lila to remove her earring so that she may train to better control her own beast form. After Jixie removes her earring she transforms but is unable to resist the anger of the beast going berserk and attacking Zackary. The siblings fight each other off until Zack gets an opportunity to leave the arena. Lila is locked inside still on a rampage until Vanguard squad comes in to fight Lila off. Ryder is bitten on the shoulder by Lila when he attempts to reattach her earring causing the rest of the squad to attack. Augusta lets out a powerful yell as she wields ice magic and her greatsword, Kuroi Kage fires lightning magic off, and Melanie uses her blue flames. This only slows Lila down and she becomes distracted by the scent of blood coming from Jixie. Lila runs over to Jixie to attack but is then captured in dueling barrier by Ryder. With Lila subdued her earring is placed back on returning her to normal in a severely injured state. The headmaster then takes Lila to the infirmary for her to recover. 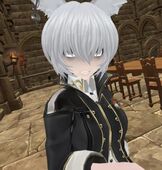 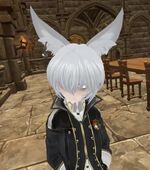 The Cursed. Art by LayzziSkipper.

Lila in her wolf form.

Lila on the cliff above the waterfall, talking to Chipz.

Lila hiding of the Inquisition in the Duat desert camp

Lila, Hannah and Augusta in the med bay

Lila and Ymra in Albrecht office

Teaching Lnik about the Knock spell

Lila and Flora on the main hall 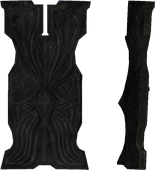 Lila in her combat uniform