Small?
Leeroy, one of the founding members of Loli Squad.

Back in the day, barely anyone streamed VRChat, one of the first was Leeroy. He explored the world, usually with Shadowsnipe, and established one of the most successful groups in VRChat, the Loli Squad.

Nagzz witnessed that Shadowsnipe, Moopi and Leeroy constantly hanging out and usually dancing and playing music. He told the trio that they almost are always together, and the trio formed a squad. 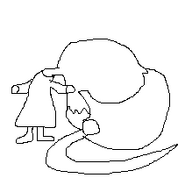 An accurate artist rendition of Leeroy
Community content is available under CC-BY-SA unless otherwise noted.
Advertisement