Kyana, formerly known as 'xxKyanaxx', is known to some as "the lustful heroine of many personalities".

When not hanging out and exploring new worlds with friends in VRChat, she roleplays as a part-time worker and 'Bunny Girl' for her ex-husband Roflgator at his various bars and locations, most often The Golden Gator in Bricktown.

Since starring as one of the main cast in the movie Mushy Apples she's recently been referred to as somewhat of a celebrity. A few months after the successful debut of the movie, she married her co-star and fiance S0ra on October 21st, 2018.

She was killed and Zombified by HelloKitten. Since becoming a zombie she still has her past senses and often appear pretty much as her old self - but now with glowing yellow eyes.

'Rob' Roflgator discovered Kyana in her 'Clamhead form' at an MMD (MikuMikuDance) night club in early 2018 while humorously searching for a candidate to devour his anus for $5000; luckily for him, the naive clamhead temptress offered her services to do it. xxKyanaxx offered to eat Rob's colleague Briteone's ass "free of charge". After the short, lewd and hilarious exchange, Roflgator was impressed by her dedication and recruited her to his hard drive and thus, Kyana's history with Rob's crew began. Rob and Kyana would also become married for a short time due to these developments, but would divorce later.

After the marriage to Rob, Clamhead Kyana and BriteOne eventually got married in The Great Pug by R3dzDead. After the ceremony, both were serenaded by Chipz improvising a song dedicated to their 'Ass-Eating' endeavors.

She would later join Rob's so-called 'Bunny Harem' at the Pug, serving as a part-time waitress.

After various raunchy and promiscuous escapades with various people, including WiFiPunk, XxCORREYxx, and Sneakiii, Kyana would eventually begin dating Foreigner, the staunch bodyguard of Rob and Jor Rilla. However, as of June 2018, Foreigner and Kyana were no longer together.

She is considered one of Drekwiz's "Mamas" and has been on a date with VII. In her own words, she dated Drek in the day, and her latest fling S0ra at night. Her ex, Foreigner, would seemingly become jealous of them, trying to intimidate S0ra whenever he sees them.

On June 24th 2018 Kyana would announce to Rob that S0ra and Foreigner began their own relations, with them claiming they're just "bros being bros". Kyana and S0ra would break up a couple days later, while continuing to participate in Drek's "Wachelor/Mamabowl" where his "mamas" compete to be his "Top Mama". She would make it all the way down to the last round, but end up being the runner-up to Justaminx. Kyana would later tell Rob that she "wanted" to lose. In July, during shooting for the movie Mushy Apples, Kyana would announce that her and S0ra were back together.

She is currently living the life as an "a-lister" with S0ra, reaping the benefits of being the main stars of the movie. This has caused some people, like Rob, to accuse the couple of "going Hollywood".

S0ra proposed to her on Sept 23rd in the bathroom of The Bricktown Golden Gator and she accepted. Following the proposal she was shot in a seemingly random act of violence.

During the Mafia Wars arc (Season 1 of the 'Legends of Roflgator') where a war between Rob's bar and the encroaching Calzone Mafia escalated, Emery and Kyana were both lured away and held for ransom by 'Uncle' Tommy, an associate of the Calzones. Kyana would escape and report back to Rob; a retrieval team was assembled and Uncle Tommy's beach house was raided. Although Buza was shot and lost his body for awhile, through hard negotiation and coercion, Rob and crew would successfully retrieve Emery and scare off the mafioso.

On October 21st, after weeks of being engaged, Kyana and S0ra held a lavish wedding ceremony. There was no circle pit, despite Rob attending.

Following late 2018 to 2019 Kyana would become one of the most loyal workers at The Golden Gator, often seen manning the bar counter and serving drinks to patrons. Even occasionally gracing the stage with one dance performance every now and then.

On Mar 24th, 2019 she participated in a Beauty Pageant hosted by Roflgator competing against Zombie Girl, Darling, UzuriMia, Jogie, Emily and Sorry among others. She ended up loosing to Zombie Girl who was titled Miss VRChat.

On Mar 27th, 2019 SciFri found her body resting in a large pool of blood left on the kitchen floor of The Golden Gator. He quickly brought Roflgator who was shocked at what he saw and immediately started throwing accusations and suspicion toward the various people present by the time of the crime. First SciFri himself, then Cranberry and his cousin and eventually Murder Crumpet. They all denied it and on second thought did not really seem to be viable suspects.

Spellboy examined her body and found that her head had been cracked open due to a blunt force trauma with an indent possibly caused by a bat.

S0ra lost himself in despair when he witnessed her dead body and got so distraught that he was isolated in a jail cell by Bearly in order to calm down. After calming down he cursed whoever caused her death and stated that he would enact his unforgiving revenge on whoever that may be.

It was later accidentally revealed by HeGone that he believed it to be his girlfriend Emily who had indirectly caused Kyanas murder. After some heavy interrogations of Emily by Roflgator and Foreigner they extracted that she had asked the resident zombie girl to perform an "experiment" on Kyana.

Returning to the scene of the crime, to all the onlookers horror - Kyana rose from the dead... as a zombie. S0ra still distraught became even more so as Roflgator tried to convince him to come to terms with her zombie-fication. The alligator robot tried to play it off as being something good with his reasoning being that "the customers appear to like Zombie Girls".

After being turned into a zombie by HelloKitten, she would later be seen dancing on the stage at The Golden Gator to perhaps the most fitting song ever.

Kyana is known for her bubbly, naive, and seemingly air-headed persona, punctuated by her wacky antics around her friends, leading some to think she's "crazy" or simply too hard to truly understand. However she's surprisingly thoughtful and known to become fairly personal with those that she chooses to trust. She's not as empty-headed or incompetent as Shrimp, but definitely more dangerous in terms of giving her any type of control over anything complex. Her favorite pastime in VRChat is to sit in front of mirrors, especially the ones in The Great Pug and the Avatar Testing maps.

In-game, she does not like the minutia of maintaining committed (monogamous) relationships and the hassle of dating in general, preferring to skip ahead to the "good stuff". This has led to many guys being "buddies" of hers, to which she doesn't mind. She would eventually announce that she's finally decided to pursue a full-fledged committed relationship with S0ra, "taking it slow".

The scuffed looking cousin of Roflgator. He has a very long snout that extends as he talks. Whenever he appears he has a tendency of getting injured in various ways.

Chocolate is an obese woman regularly seen strangely wearing a bathing suit in public. She's a regular at The Golden Gator and has a gluttonous hunger for all kinds of food, even that of poor quality. When eating she makes a lot of noise.

She participated in a dating game on Dec 21st, 2018 vying for Panunus affection but lost to Cassiopeiahiina.

On Jan 25th, 2019 while dining at The Golden Gator she was serviced by Meech, as ordered by Roflgator in an attempt to pair them together. The tiny skeleton man kept hurling insults at her, expressing his disgust which made their pairing out to be a complete failure.

Later the same night she somehow managed to get her credit card stuck in her bum and had to get Porthunax, and the assistance from various other patrons in order to retrieve it.

She participated in a beauty pageant on Mar 24th 2019. Kyana also participated on the same occasion, having to swap characters.

Leslie is a furry boy who works at the 8est store in Bricktown. He's employed by SciFri and Crocolol.

A German health inspector expressed a love interest for him on Jan 27th, 2019 but later stood him up - for a private dance from Roflgator instead. 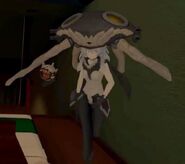 Kyana and BriteOne get wed by R3dzdead in The Great Pug 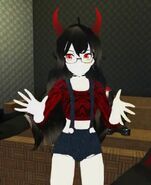 Demon-possessed Kyana being exorcised by followers of the Blue Man 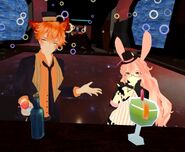 Kyana and S0ra at the Gator Bar 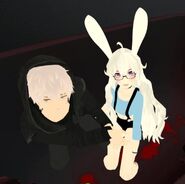 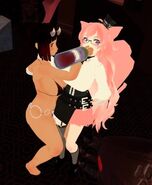 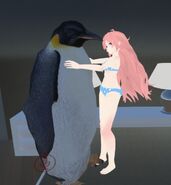 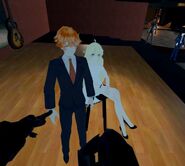 S0ra and Kyana during the premiere of Mushy Apples. 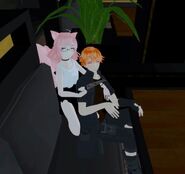 Kyana holding a knife at S0ras throat during a double date with Foreigner and Gashina.

Standing in as a greeter at the entrance to The Golden Gator when Wooks was absent. 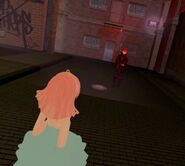 Kyana on a date with S0ra at The Greater Gator.

With Jogie Joey in Poland. 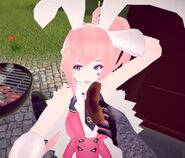 Zombie Girl aka HelloKitten is not Kyana although some argue that they sound similar. 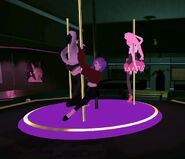 Dancing with AughtyVon and Kasumi. 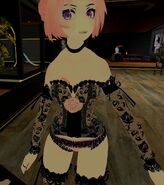 Showing off her tattoo of S0ra. 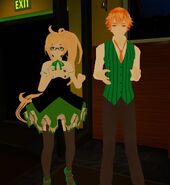 Participating in a Beauty Pageant

On stage with Java (actually Raziell in disguise), Darling and Emily. 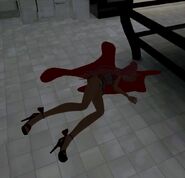 S0ra in despair coming to grips with the death of Kyana... 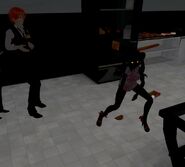 S0ra is shocked in disbelief... 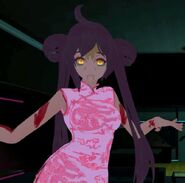 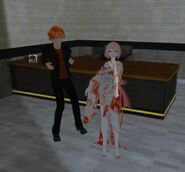 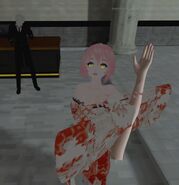 She brought "a helping hand"... 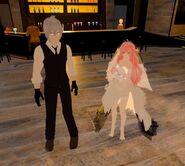 Kyana in her brides gown next to Kilal2. 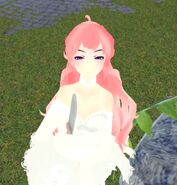 The bride threatens Roflgator not to interrupt her wedding.

The scuffed looking "Cousin gator" portrayed by Kyana and Vore.

Chocolate singing during a dating show. 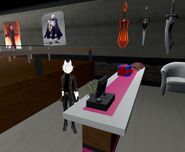 Leslie mans the counter at the 8est store.

Meech expresses his disgust at her.

Getting help from Ikumi after falling over.

Chocolate got her credit card stuck in her... bum.

Dark haired Kyana or another disguise? 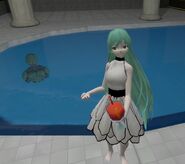 In disguise pranking and going on a date with Vincent.

Chocolate participating in a beauty pageant 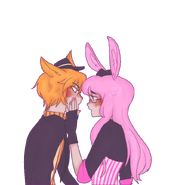 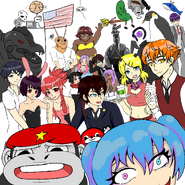 Artwork made by Kyana depicting several members from the Gator RP Group.
Community content is available under CC-BY-SA unless otherwise noted.
Advertisement