Single and ready to Mingle

KuriGames, also know as Kuri, has been known to be one of the nicest guys you could meet. He is not afraid to show his love and support. He has even taken time out of his own streams to support friends who are in need.

As a Twitch streamer, Kuri spends most of his time chatting, hosting hangouts, gaming with his viewers, or participating in Role Plays on VRChat. During his Role Play sessions, he will be heavily invested in his character and the story.

Kuri has roleplayed as a vast array of various characters when roleplaying, and has starred in several big roleplays over the years. Out-of-character he has often joined parties and various other fun groups and hangouts in the VRChat community.

On July 13th, 2020 KuriGames earned his twitch partnership and spent the day celebrating with his community.

The main character from the game Asura's Wrath, he is a powerful demigod. Kuri uses this character to punch others. This is also the first (known) character he has roleplayed as.

An original human character that was meant for investigative or mystery Role Plays.

Nephalem Kuri is the character featured in The Crossover. This character of Kuri has the power to steal souls and even halt time for those who are weaker than him. 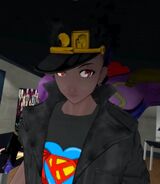 Theres someone behind you Kuri... 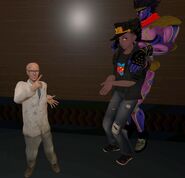 Kuri as seen in his OG detective persona.
Community content is available under CC-BY-SA unless otherwise noted.
Advertisement