Buried Under the City

Koi grew up in the Inner City of Savior City. His parents were a part of the dying middle class of the Inner City and had to struggle his way to survive in the gloss of the Inner City. After his tribulations he yearns for an easier life for all, and is willing to give his own life away if it means less people have to live like he did.

A Man Who Strives for Peace

Koi is a 6’ 2” aged man with dirty grey hair and a tired disposition. He stands in an imposition figure but a calm presence. He bares the colors of the Union on his loose coat. 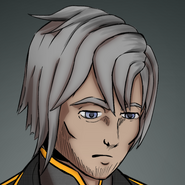 Speaking to Sten with Toolbox while visiting Scrap Town