"These creatures are an enigma, they've gone above and beyond where I'd expect them to be... they can be very surprising..." ― Unknown

Knuckles are small semi-sapient species of bipedal mouse-like creatures that have invaded the world of VRChat. Knuckles are scattered through out the VRChat servers, and are capable of surviving outside of their natural habitat.

Then a deviantart user by the name of tidiestflyer made a 3d model with no bones and paint. then Gaztons and friends made their own fixed version.

Knuckles could range from microscopic to 20 feet in size, with the majority being the size of a regular person's shin. They have round bodies with very small arms and legs. Their freedom of motion is restricted as an result.

Knuckles appear to be exclusively male.

There are currently 5 types of knuckles that have been discovered. The common 'Red Knuckles', the Warrior type 'Blue Knuckles', the 'Kommanda', also known as 'Gold Knuckles' that is believed to be a leader capable of leading one or multiple tribes, and lastly 'Rare Knuckles', a type of Knuckles that range from microscopic tiny to 20 feet tall colossal monstrosities, and 'Shiny Knuckles' (Knuckles with a different colour other than Blue, Red or Gold). There are also other variants such as the 'Italian' and 'Wakandan Knuckles'.

Knuckles are communal and they flock in groups that could range from 3 to 20, they are capable of human speech and will often ask avatars questions such as 'Do you know the way' in questionably authentic Ugandan accents.

Knuckles mainly function in tribes where they are led by a 'Kommanda', but sometimes will elect a female player avatar whom they call 'Queen', and will follow her commands until the Queen leaves the current server, they will then elect a new one. Knuckles will regularly chant 'Queen' and start making slurping or clicking noises, The clicking noise is the sound of the national anthem of 'Uganda'.

Despite their small size, Knuckles are able to produce a type of somewhat surprisingly lethal Nitric Acid via spitting, this can be very dangerous and life threatening if one were to come into contact. Knuckles' use this method as their main way of aggressive behavior, against many players that they have deemed as hostile to them and their tribe, dubbing them 'non-believas' or 'Fake-Queen'.

The most common types are the Red Knuckles, they are believed to be at the bottom of their social hierarchy, and are common sights of many Knuckles tribes. They sometimes may wear their own Ugandan national flag on their backs or have inscriptions on their chests such as 'I love Uganda'. They currently are estimated to fill around 70% of the entire Knuckles population.

The second most common types are the Blue Knuckles, they are believed to be the warrior class of the Knuckles tribes, and are distinguished by the moon and star symbols on their chest, and an inscription on their back 'Ugandan Warrior'. Although physically similar in size with the Red Knuckles, they seem to have more athletic prowess and combat ability than the regular Red Knuckles. They seem to be the backbone of the Ugandan National Army.

The highest known hierarchy of the Knuckles species are the Kommandas, they are gold and similar physical size in appearance, and all knuckles are to follow them without question. The 'Grand Kommanda' is Gaztons [1], the first ever Knuckles to appear in the VRChat world, he currently has supreme power over all Knuckles tribes.

Their are many brothers who are helpers of the Commander such as D1rty.

Rare Knuckles such as ultra large Knuckles, microscopic Knuckles are currently unclear in terms of Knuckles in the social hierarchy, but large knuckles also known as 'Big Bruddas' act as bodyguards for the smaller Red Knuckles.

Conservative groups use Knuckles as a joke and pretend there's only one political agenda following the Knuckles species and that is Communism. Communist Knuckles have been found extremely rarely, more than any discovered Knuckles so far. Because of their political beliefs, they should be at the top of the Hierarchy as government representatives of a political party, but because of their only political agenda being Communism, and that the Knuckles' species being known to have a lack in advanced intellect (such as for things political), they refer to themselves as the "working class" only, trying to instill Marxist ideals amongst their species.

Even more rare then the Communist Knuckles is the Italian variant, usually seen in a chef's hat, apron, and large, curled mustache. They usually carry a pizza box, and drive a moped. This ride is usually accompanied by the Vinesauce song, Pizza Pasta.

What made rare appearances during the "Knuckles Invasion" was the Wakandan variant, sporting the outfit of Marvel superhero Black Panther. They're apparently the sworn of protectors of "Wakanda", they have appeared in various worlds and most notably have visited Uganda as well making their presence known to other players as well other Knuckles nearby. Here's one instance of Wakandan Knuckles as documented in this video.

Further information: The Ugandan War of 2018

Several wars broke out with the Knuckles, these include the Project H Hoppous, The Marching Kitty Band, the Penguins,Imperial Waifu Army, the Kannas, the Loli Army, and the Buff Bois, one major battle was fought at a McDonalds, with the Hoppous and Kittens at the front lines. The war ended when a Corey in the House house ran in and confused everyone.

There are few underground Knuckle groups on VRChat. They are not as public as the OG Knuckles but are actively still in the game. The Knuckle have became civil and adjusted to the Metaverse. Leader of one of these are HighCommandDUH who runs Ebola 2.0. Gaztons passed his title to a new person as he moved on to a new stage of his life.

Screenshot from the map Uganda 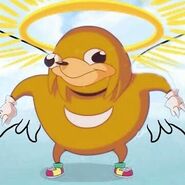 Knuckles named Gaztons the fabled leader of the Ugandans.

Various knuckles "in the wild" 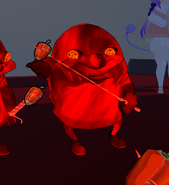