Blessed Knight of The White Rose

Male (Sometimes, due to RP shenanigans, turns into a female)

Red (or really dark pink depending on the lighting)

Kirbynite is a content creator and an explorer of the VRChat metaverse. He refers to his character in VRChat as "Kirby Nite", while referring to his avatar on social media as "Kirbynite".

After watching a variety of VRChat videos and desperately desiring change in his life, Kirbynite jumped into VRChat immediately after purchasing a VR headset. He wanted to share the hijinx with close friends, so he recorded and uploaded some of his adventures. Upon noticing people he had not met before were watching his videos, he decided to put more effort in the presentation of his content. Slightly.

His main videos are set to be in an episodic fashion, attempting to cover context for the new places and people he meets in recent and future videos. Recently, he has added VRChat to the list of things he streamed on his Twitch channel. Kirbynite hangs out with a varied assortment of people, from the friendly Nova, Shadow, and Zwei, to the dangerous Tenebris Bellator, Ryuu, and Khavix. He also somehow manages to tolerate the antics of certain lewd individuals.

At the beginning of his channel, he dabbled in SFM's and has done a Let's Play of Enderal, a total conversion mod for the Elder Scrolls V: Skyrim.

Kirby is known for being rather peaceful and tends to lean towards pacifism. However, he does seem to be willing to get into a fight, especially when it comes to defending someone. He used to be known for using a large shield, supply of healing items, and smoke bombs, items that were better reflective of his non-violent nature. After discovering his demonic ancestry, Kirby's toolset gradually changed to a more balanced one, though a more aggressive one.

He is also known to have a Robobot in which he can control remotely and use as a means to escape or provide additional firepower, but this often entices others to attempt to get a "free ride" on the open seat.

Kirby is sometimes seen as not very well off. His battle clothes were given to him, some of his weapons used to be rusty and found off the ground, and even his Robobot was found abandoned and broken. Most of the money he gets is used towards purchasing large quantities of Maxim Tomatoes, which are healing items, and Stock Lives, which help him deal with respawning without the VRChat Metaverse's usual health insurance. The Stock Lives may be a placebo, however.

His main character, and the star of this page.

The Robobot is Kirby's mech that is used for special missions and when Kirby himself is incapacitated.

Eva, a Scottish/Irish (it depends on how bad Kirby's accent is on that day) Dulahan that is used for more casual RPs and exploring VRKet.

The Chip Addicted Ferret is usually an 'extra' in Kirby's RP characters, used to lighten the mood or plot exposition.

Kirbette is the result of a Genderswap spell gone awry.

Part of the Grape Garden's Neighborhood Watch and Defacto Leaders of the Magical Girls of the neighborhood Orlandosaka.

Becky is a more recent character that earned 'regular status' in Kirby's ever growing roster of characters. Enjoys Adventures and jollyranchers.

Kirby has not shared much about his past. He remembers nothing of his biological parents. He had mentioned living on the streets and implied that he had resorted to thievery for survival. At some point, he was found by Ashunera and became part of her family.

At some point in his life, Kirby had gone out onto his own and came across several dangerous folk, which inspired him to work on his methods of defense. His shield was reinforced to handle attacks better, and enchanted to handle magic and armor piercing shots.

After the Start of "RP" RPs

Using money given by WhiteWolf, Kirby obtained a new sword, a Silver Knight Straight Sword, and a hidden combat knife. One night, Kirby's new sword was tempered by WhiteWolf, while at the Madcat.

At some point, due to all the stress going on around him with Monster Mash, Church on the Hill, and several other factors, Kirbynite went 'missing' from Orlandosoka. After weeks of searching, his wife, family and closest friends discovered he was in the Midnight Channel world, (it's unclear if he went willingly or was taken). Due to everything else, he was physically exhausted, and was bed ridden for a good few months, needing assistence to even walk around his own home and using a cane.

To still be involved with his Adventures Guild and missions, Kirby employed his Robobot, remotely controlling it fromt he comfort and safety of his bed. (One wonders why he didn't just pilote the damn thing himself). Kirby also joined his comrades to search for BWC66930, who has gone missing from Zenic Co during a hostile take over.

After months of being stuck inside his own home, Kirbynite suddenly got buffer (what he calls Kirby v0.4) and is more active again with his comrades in the Grape Gardens.

Kirbynite joined Sho Kasai, Glaring Lotus, Nora and Fruity Parfait in the mission to retrieve New Ven from the clutches of Old Ven. He suffered a back injury and fought several minions during this event. He even suplexed on of the Ven Minions. Almost reverted back to his exhausted form when Ven refused to return back to Orlandosaka with the group.

Zentreya is quite protective of Kirby and often dotes on him. This has caused her to not be very approving of Kirby's relationship with Fruity. Progress is still being made to make Zentreya go from barely tolerating Fruity to being somewhat okay with Fruity.

Khavix seems to be bothered by having some kind of familial tie to Kirby, often attempting (and often succeeding) to stab Kirby with a whatever weaponry they have on hand at the time.

Ashunera has not been outright hostile towards Kirby, but occasionally refers to him a wimp for his pacifist nature. Ashunera's judging eyes helped speed up the pace at which Kirby was searching for new weaponry.

Nimewe seems to be, so far, the friendliest family member to Kirby. Nimewe has been seen more and more around the G. Gardens Home & City, usually in the company of BWC. She often shows concern for Kirbynite, and most of the time, breaks into his house and smashes a table, before dabbing and leaving.

While Sho Kasai initially met Kirby with indifference, she did come to be helpful to him, willing to retrieve and pass along information.

Altina Orion had entered his life initially to spy on Kakureta, but was eventually adopted, despite the things she had done.

Kirby still is unsure on how to feel about Poyo, as Poyo seems to come from alternate timeline AND dimension. He feels as thought as he's obligated to treat Poyo as his own child. As of late, Poyo has been helping Fruity take care of Kirby (though he hasn't been present in any current RPs.)

Shiro is apparently Kirby's biological mother, who at one point, vanished from his life. She returned only to see Kirby as 'Kirbette', and could be quoted 'All my children have become e-thots'. Shiro enjoys teasing Kirby as he's her only son, and usually watches from the sidelines.

Kirby initially felt apprehensive about having family ties with Wrath. Wrath refers to himself as Kirby's father despite being introduced as his grandfather. Before either of them could form a positive bond, Kirby wound up upsetting Wrath, causing the archangel to briefly send Fruity to a plane of Hell and causing Sho to relive a series of traumatic experiences.

Kirby's relationship with Zentreya's daughter, Saranavii, is very well, as Saranavii is the only one so far in the family to not openly try to hurt him. Saranavii only recently learned that Kirby was her uncle and instantly recruited him to her cause to revive the ALA and over throw Medusa. Kirby was grief stricken when it was revealed Saranavii died, adding to his already stress filled life before he snapped.

Speaking of, Medusa, one of Kirby's elder sisters, was first encountered when Medusa masqueraded as Zentreya in front of several of Zentreya's most trusted friends. Things went down the drain faster then expected, when Kirby found it was really Medusa, and had his powers siphoned. Kirby has expressed no ill-will to Medusa though, and always gave her an option to stop her ways, in the past and in the present.

Altreya, oddly enough, is one of the Sisters Three that Kirby has the least amount of time with, it is unknown why. However, the two are making attempts to spend time with each other and the relationship seems good. Altreya surprised Kirbynite by visiting him after his break down to check if he was OK.

All the names associated with Blue Devil states have not been mentioned in canon.

A pink mech found by Kirby. Normally stored in Kirby's home's basement, it can be summoned to aid him in various situations. 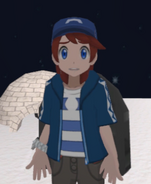 Kirby with his family members