Second voice in the void (Mother)

Kimple or KimplEClonE, is a kitty bot that loves to explore VRChat and making new friends daily. She is known as one of the most iconic early supporters and content creators of the game since its early days. She uses a text-to-speech engine to communicate.

A member of Team Five in 2017-2018, Kimple became known an easygoing robot cat that loves nothing more than to play jokes, dance and show off her vast collection of avatars. She might technically be one of the earliest VTubers, known to stream with a virtual avatar overlay in VRChat while simultaneously playing a variety of other video games.

A common sight among various roleplayers she used to be a regular participant in Metaverse RP since its start and earned the reputation of being an observer during The Crossover and as a keeper of the archives in Chipz RP.

Kimple's family, mainly her father, has made himself known, and as of May 7th, Kimple's mother has appeared, giving Kimple a new body. Kimple has no siblings, but the alligator robot Roflgator claims to be her cousin via robotics. Kimple said that logic is borderline racist against Robots: "Not all of us are related". Kimply generally does not seem to consider Roflgator a direct relative at all, despite the gator bot's claims.

Kimple was invited to The Lanfear Estate by Lanfear herself, and before the entire tour of her house went down in the usual chaos, Kimple spotted a photo of Lanfear and Oathmeal. Upon seeing it, the Kitty Bot asked Lanfear if they were related, and came to conclude 'They are similar, I will assume yes'. Before she could question more, the Loli Squad started chasing Lanfear around her own house.

The two have since confirmed they were biological sisters, and greatly respect Kimple for helping them reunite.

She made an appearance in Nagzz's first VRChat video, "WEIRD HOUSE PARTY" appearing in the background as Rad held a gun to Nagzz, sitting in a box labeled "Free Kitty Bot". She also danced in Nagzz's palm, and he has gone on record to say "That was one of the things that intrigued me of VRChat the most, the fact you can do anything."

Kimple made fast friends with Nagzz and since then, her friendslist has grown faster then she can handle, but she loves it.

She was one of the only people Joey specifically asked to be invited to his wedding and was even included in his vows.

During Kimple's daily stream, where she played Midair, during her usual outro, Kimple suddenly froze, glitched, and fell, as a booming voice that sounded nothing like her father told her not to be afraid. Her stream didn't end with her usual Marching Kitten theme song, instead, it ended with her secondary camera looking at Kimple, collapsed in front of her mirror, the light in her eyes completely out.

As of May 7th, Kimple's father and her newly arrived mother gave Kimple a new body.

Kimple was in Chipz club, where she kept close watch over him and her dear friend, Lanfear. She was on the first line of defense when Kuri, Ikrium, and Zentreya rushed the club, carrying weapons and demanding to speak to the charismatic vampire. Thinking fast, Kimple rounded up Chipz' group and evacuated them while she and SciFri attempted to hold off the aggressors. Using some sort of reality warping field, Kimple cloaked SciFri in safety, as Zentreya covered Kuri with her distortion field. The matter was made worse when Chipz started to gather a crew to fight

However, when Joey Bagels himself came to the club to investigate for himself, Kimple informed the level-headed leader to what was going on. She then decided to let the two leaders sit down and discuss things, and a friendship and mutual respect between the two Mafia leaders bloomed.

Due to the rising concern and whispers of a war between Chipz's squad and Joey's extended family (including the Loli Squad, Virtual Reality Police Department, Anti-Lewd Army and other factions.), Kimple 'kidnapped' Lanfear and took her to her room. She sat the Neko down and discussed the possible outcomes of the relations between Chipz and Nagzz21. Kimple learned that Lanfear does plan to stay with Joey and even wants to have a biological child with him and that the feline is super eager for the day that Joey finally mans up and proposes. Kimple then turned to her inner thoughts (her chat, the Kittens.) for new questions, including her favorite flavor of ice cream, her favorite colors, and other nonsense questions. KimplE also asked Chipz similar questions, finding out he only sees Lanfear as a very dear friend.

Kimple, knowing a war between the two factions would not only upset her father but possibly VRPill, could get involved. Kimple has since been attempting to keep an eye on both Lanfear and Chipz, JUST IN CASE one of them step over their bounds, ready to step in and try to distract them.

Kimple, in her flying security camera mode, has spied on Chipz and Kuri's secret meeting, only to show up at the end to assist Kuri in training, to find answers, claiming that the VR World is in an endless cycle.

KimplE was summoned by Chipz to a world where he, Lanfear and SciFri were, after hearing information from her ever-present father, that something was wrong. The Kitty Bot dragged SciFri away to question him, even threatening his life, and received no real answer. KimplE went to Lanfear next, and, well, you can guess how that question and answering bit went.

Then she got to Chipz. After laying on the heat, KimplE finally got him to reveal what exactly he was up to, and got him to sing the song that made Lanfear's heart confused, "Treat you Better". KimplE, while Chipz had his back turned, gathered SciFri and Lanfear, interrupted the song, and claimed "I got all I needed" before jumping off the side of the map and reappearing in the Battle Discs map to train some rookie students.

Detective Kimple on the case

KimplE ran into VRChat recently, a kittybot on a mission. Joining in on Lanfear and her core group of friends, the cyber cat whisked Lanfear away to a Haunted Spooky Map. There, she showed Lanfear the graves of many fallen comrades and friends (not really dead, well...killed by memes at least, or just stopped playing altogether.). KimplE, in an odd moment, spoke to her Kittens, saying the following was not for their eyes and ears, and proceeded to mute and cover the stream. It is unknown what she and Lanfear spoke about.

Later that same evening, KimplE went into Chipz's nightclub, finding out SciFri was having trouble believing that Chipz only turned one woman into a vampire. Chipz was running around, constantly being dragged away to speak privately, visibly stressed.

KimplE's worst fears were confirmed. Chipz is indeed attempting to start an all-out war and is gathering as many heavy hitters as he can. But he keeps losing them to other people or ends up getting duds. KimplE, in her stealth mode, followed Chipz and his many friends around, even going so far as to hide in the ceiling as Chipz spoke to Lanfear privately. There was even a threat made on KimplE's life involving a virus.

After all the chaos, KimplE confronted Lanfear, telling her to "Stay safe" and that "actions come with consequences". While this happened, her Kittens were speculating many things, including "Could Chipz be attempting to turn Lanfear into a vampire".

With her message of safety delivered to Lanfear, KimplE once again warped away to train newcomers in the sport of Battle Disc, as well as train herself for the upcoming tournament between herself, Rad and Goose. She found out that Zeon, the love of her life, was actually on Goose's team, and refused to battle disc with him.

By now, KimplE has had enough. She confirmed that Chipz indeed wanted a war, and tried to tell the man he wasn't ready. She told him to draw a weapon and attack her, (much to Chipz surprise.). After minutes of tension, Chipz pulled out his revolver and hesitated. He then fired a single round into KimplE (while looking away.) and KimplE, after praising him, exploded, as a dark, sinister liquid(?) covered the floor and KimplE's parts scattered on the ground.

After a few moments, KimplE returned. But it wasn't the normal kittybot. Now a good 12 feet tall, wielding some sort of ax/hook weapon. On her face a look of pure joy, a row of sharp teeth, and a completely different color. KimplE now chased Chipz around the room, firing some sort of projectile from her body. After more shots were fired from Chipz, KimplE finally cornered him and slammed her weapon down on him, sending him god knows where.

KimplE went missing after she confronted Chipz that one night, the kitty bot returned, confronting Chipz, SciFri, and VII, attempting to get answers while answering all she could.

The subject of 'cycles' was introduced to the whole concept of VRChat. While answering more questions and producing even more questions while doing so, KimplE faced SciFri as he attempted to learn the secrets of the world.

It was later revealed KimplE was seen as a 'guardian angel' for both Neko sisters, and when Chipz attempted to seduce Lanfear one last time, KimplE was there, keeping an ever watchful eye on the events preceding. KimplE then took Lanfear and Oathmeal to the void, where more answers where given.

When the Cycle was literally crumbling, people vanishing and fights breaking out, KimplE put Chipz to the test to become Lanfear and Oathmeal's Guardian. She fought him as her Mad God form, but getting distracted by Chipz' silver tongue left her open to an attack. Chipz beat the test, but sadly, was still fading from existence. With his blood, he sealed the deal that Joey would become the Neko Sister's Guardian. KimplE now gave up her role as watchful protector, but is still very close with the two cats, Joey, and even Chipz.

Upon starting the new Cycle, KimplE witnessed the events unfold with Amika and Oathmeal, the same night where originally, Kuri, Zentreya and Ikrium raided the club, however, in these events, Joey calmly walked in and offered to take Lanfear out on a date.

As a Guardian that exists outside the cycle and as a kitty bot, Kimple displays abilities that are possibly an inherited gift from her father. Below is a list of the many powers and abilities that Kimple has demonstrated.

Kimple has made herself at home in a typical room, furnished with many photos of the many friends she has made in VRChat. Other features include a TV that she streams games from, i.e. her ongoing Bioshock series.

In the center of her room is a laptop where she can watch other people stream. A whiteboard for her to greet people coming into her stream, two small stuffed toys, a mirror, and a special 'hidden' feature on her entertainment center.

The feature is a small avatar of Kimple, and if one clicks it, they shrink down to tiny proportions and get to explore the top of the entertainment center and even some other places. It's revealed through this, that Kimple has a tiny furniture set on top of her central table behind her laptop.

The system which Kimple uses to stream is a Super Famicom, which she clearly modified to play more advanced games like BioShock. 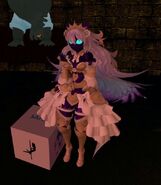 Kimple in the Lair of Roflgator 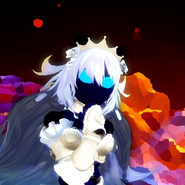 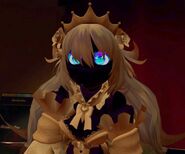 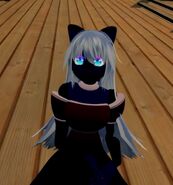 Her eyes are screens 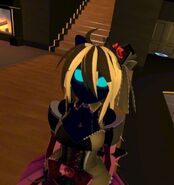 The KimplE explanation by Kimple herself. 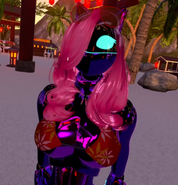 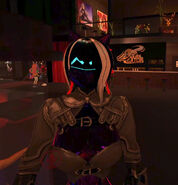 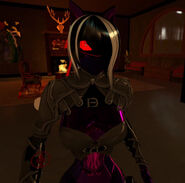